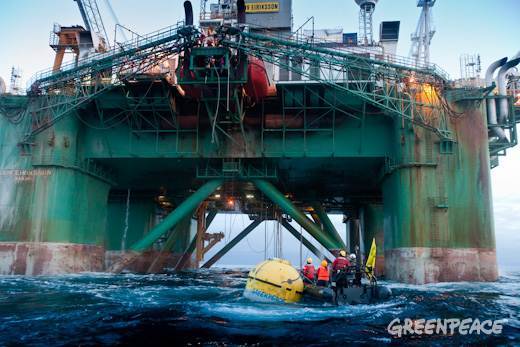 On Sunday Greenpeace activists climbed up an oil rig off Greenland's coast in an attempt to stop the Scottish oil company, Cairn Energy, from starting deepwater drilling in the arctic waters. The activists arrived at the rig in inflatable speedboats launched from the Greenpeace ship Esperanza, which had avoided a Danish warship shadowing them for days.

The environmental group said the activists scaled the Cairn Energy rig early Sunday and are now hanging under it in a "survival pod", which is occupied by two Greenpeace members. It said the group has enough food and water to stay there for 10 days. Cairn Energy had earlier this month won permission to drill up to seven oil exploration wells off the Arctic island's west coast.

Greenpeace has criticized Cairn, which is the only company drilling in the area, for not taking the extra precautions needed to avoid accidents such as the 2010 Gulf of Mexico oil spill. 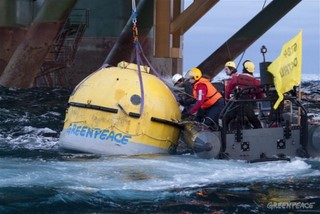 The company has said that they "seeks to operate in a safe and prudent manner" and pointed out that authorities in Greenland have established stringent operating regulations, similar to those applied in the Norwegian North Sea.
Greenpeace said it hopes the action can stall Cairn's plans to complete the exploration before winter, forcing the company to abandon the search for oil for another year. for they claim that if drilling is delayed for just a short time, Cairn could struggle to meet a tight deadline to complete the exploration before winter ice closes in, forcing it to abandon the search.

Cairn Energy is currently the only company drilling in the area, but Greenpeace has warned that an arctic oil rush could be set off if the company strikes oil this summer.

"We are preventing it from drilling because an oil spill up here would be nearly impossible to deal with due to the freezing conditions and remote location," States Greenpeace campaigner Ben Ayliffe. "A BP-style blow-out off the Greenland coast would make the Deepwater Horizon clean-up look simple."

Greenpeace activists also climbed aboard the Leiv Eiriksson rig when it left a port in Istanbul in April, but were forced to abandon that protest due to bad weather. Last year, activists also tried to stop drilling in the area by climbing onto Cairn's Stena Don rig.