The Danish navy has reportedly confronted and arrested a crew of two environmental activists "occupying" a 53,000-ton offshore oil rig in a "survival pod" hanging from the Cairn Energy oil rig, about 100 miles off the coast of Greenland, the non-governmental organization Greenpeace announced late Wednesday via prepared statement.

The anti-Arctic development group vowed to "continue their campaign after climbers believed to be from the Danish navy arrested an occupation team. "The world's had its eyes on the activists for about a month, since the team occupied a British offshore oil rig, the Leiv Erikkson, as it made its way north. After that failed, Greenpeace decided to continue to follow the rig, reporting that since last Sunday two activists had been successfully dangled from the "survival pod" underneath it.

According to the press release from Greenpeace, "a climb team operating from the rig broke into the pod--hanging 25 metres over the freezing Arctic Ocean--and arrested" the pair, one from England and the other from the U.S. 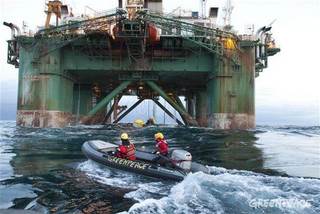 "Our [Greenpeace] climbers are in jail now, but this won't stop us opposing the madness of drilling for oil that we can't afford to burn and in a region where a spill would be almost impossible to clean up. This isn't over. We must keep on pushing till the oil companies get out of the Arctic," the press release said.

Greenpeace said in a web posting that it had delayed drilling, which must occur within a narrow window due to harsh weather conditions in the Arctic region, but Cairn Energy denied this.

A Cairn Energy spokesman said there had been "no impact on schedule."

Cairn Energy is leading a charge into offshore Greenland, which explorers believe could hold billions of barrels of oil. Exxon Mobil, Husky Energy and others also plan to drill there. However, following BP's Gulf of Mexico oil spill concerns about the difficulty in tackling offshore spills has increased and environmental campaigners have made Arctic drilling a key battleground.

The Danish government is preparing to claim the North Pole for the Kingdom of Denmark, along with other areas of the Arctic, much of which is believed to be rich in oil and gas resources. New shipping routes, including the fabled Northwest Passage, are becoming accessible and thus exploitable as the Arctic ice recedes. This could become extremely beneficial for the Greenlandic society.