Volcanic Eruption in Iceland Comes to a Halt

The volcanic eruption in the volcano Grímsvötn seems to have stopped. According to eyewitnesses this morning, the volcanic column rises only a hundred meters (330 feet) from the crater. A thick layer of ash lies all around the crater on the glacier.

The eruption in Grímsvötn has steadily grown smaller since monday. The volcanic column reached an altitude of three to five kilometers (16.000 feet) yesterday, and the output of ash is was considerably smaller than the day before, when the volcaninc column reched an altitude of 10 kilometers (32.000 feet). There have been very strong northerly winds in the area blowing the ash to the south. The winds have gone down today, according to the Icelandic Meteorological Office.

About 100 tons of volcanic materials erupt per second from the volcano in Grimsvotn yesterday. The day before, it was about 1,000 tons per second. As a comparison the output was ten to twenty thousand tons per second when the eruption peaked last Sunday. Volcanic tremors have, however, stayed unchanged. 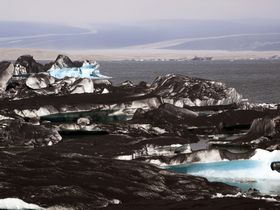 According to the Meteorological Office there have been no deep tremors and no lightning detected since midday monday. The strong northerly winds in the area yesterday, blew the ash to the south and causing much ash drift in the area but it has stopped for now.

This explosive eruption was accompanied by great amounts of ash. The ice around the crater melts and water in the subglacial lake at Grímsvötn causes the volcanic materials to explode, creating huge volume of ash.

This eruption has caused some problems for the residents in the small town of Kirkjubæjarklaustur at the south coast of Iceland, where ash has spread heavily on the town. This has caused serious interruption in the daily life of people who foresee a great cleanup of ash. The fine grained ash slips through very narrow cracks and fills houses and other equipments with the material. This has caused decreased air quality in the area, and some people have relocated cleaner areas. 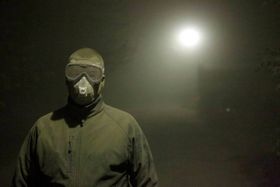 For local farmers, the ash spread has caused some damage to the live stock and their equipment. However, the toxic content in the ash is low which means that their fields remain more or less unspoiled. In the long term, the ash serves as a natural fertilizer.

Some disturbances in flight schedules have affected Northern Europe and Iceland, where the ash has spread to Scotland and Norway. The ash cloud is likely to spread further into the European Mainland and disrupt flights there.