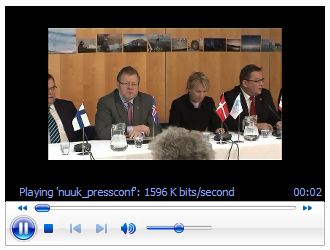 The Arctic Council Nuuk Ministerial Meeting participants held a press conference at the end of the meeting, where they expressed their satisfaction with the results of the meeting.

The Search and Rescue Agreement was considered ground-breaking, as it is the first legally binding agreement negotiated under the auspices of the Arctic Council and an important step towards safe shipping in the Arctic. The shipping and resource management will be a priority in the Swedish chairmanship agenda Swedish Foreign Minister Carl Bildt stating, that "Arctic Countries need enhanced cooperation on many future challenges in the Arctic, not least prevention, preparedness and response to oil spills. As incoming chair we will press forward with this agenda."

Arctic Council Permanent Participants had a different perspective, stating that the envuironmental issues are the most important for their communities. To maintain a healthy Arctic environment is a prerequisite for the survival of their culture and livelihoods. In the coming Swedish chairmanship period they will also "commit to working on improving health by establishing adaptive measures to protect our traditional food sources and to support and strengthen indigenous languages", stated Rodion Sulyandziga, Chairman of the Indigenous Peoples Secretariat.