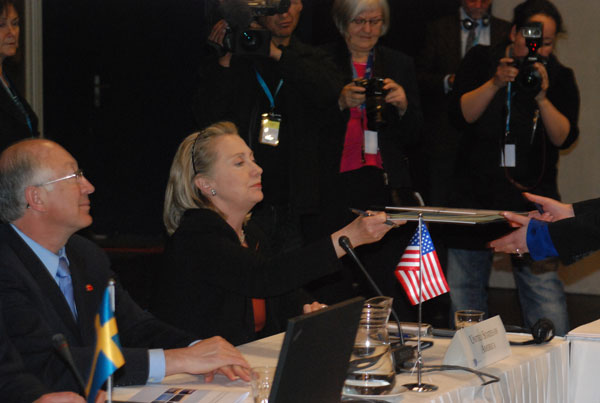 The foreign Ministers of the Arctic countries and leaders of the Arctic Indigenous Peoples witnessed a historical moment today at the Nuuk Ministerial Meeting, when the first legally binding agreement established under the auspices of the Arctic Council was signed.

The Agreement on Cooperation on Aeronautical and Maritime Search and Rescue in the Arctic lays down a framework to strengthen search and rescue cooperation and coordination in the Arctic airspace and waters.

The Parties commit themselves to broad cooperation and agree to seek cooperation also with other countries who may be able to contribute to the Arctic search and rescue operations. The agreement further delimits operational regions for the Parties, who each will bear their own costs deriving from the implementation of the Agreement.

The Ministers also gave out a Declaration marking the policy for the next biennial period. The ministers decided to strengthen the capacity of the Arctic Council to respond to the challenges and opportunities facing the Arctic by establishing a permanent Arctic Council secretariat in Tromsø, Norway. They also call for an assessment of the current state of human development in the Arctic and its relationship with climate change and recognize the need for an integrated assessment of multiple drivers of Arctic change as a tool for Indigenous Peoples, Arctic residents, governments and industry to prepare for the future.

In above photos are Hillary Clinton, the Secretary of State of the US and Össur Skarphéðinsson, the Minister of Foreign Affairs of Iceland at the SAR signing.