At the Heart of the Arctic 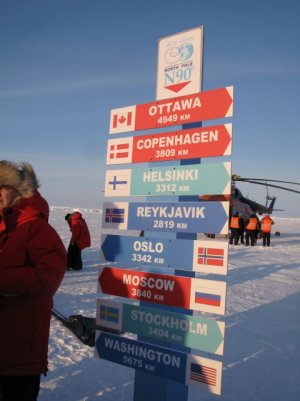 "Where does the wind blow from when you stand at the North Pole? From the South!"

Our expedition to the Arctic now has first-hand experience of this since the beginning of April. In the early morning hours, reckoned by our Finnish watches, the sun shone in a clear sky and it was almost 30 degrees below zero.

The flat, bright ice field around us was immense. Our biggest surprise was the thickness of the sea ice. Almost all of us presumed that the long-term ice would be very thick, but drilling showed that at 1.2 metres it was no thicker than the ice on which people typically go ice fishing. Although the sea ice is level on the surface, it is far from being equally thick everywhere.

Moreover, the open leads that we also discovered on our trip were evidence of the progress of climate change. Forecasts of the year when this polar area will be completely free of ice for part of the year vary from 2030 to 2050. The earlier estimate may be closer to the truth, but predicting changes in the Arctic has already proved problematic.

Invited participants have all been members of the Senior Arctic Officials committee of the Arctic Council. The composition of delegations has otherwise varied according to the themes discussed.

Our most recent trip took us from Moscow to Salekhard, the capital of the Yamal Peninsula, where we boarded Antonov-72 aircraft to reach the Nagurskoye frontier guard station on Franz Josef Land and change into polar gear. This was followed by another air transfer to the Barneo Research Camp on the polar ice, from which we covered the remaining hundred kilometres to the North Pole by MI-8 helicopter.

The revised Arctic strategy of Russia assigns pivotal status to Arctic areas. The population of the region is low. North of the 60th parallel it is about the same as that of Finland (5.3 million), but the Russian Arctic provides 91 per cent of the country's natural gas and 43 per cent of its oil production. Considering the findings of the Russian Academy of Sciences that the national wealth of Russia is based on energy and mineral resources (about 88 per cent) and on forests (about 9 per cent), it is easy to grasp the strategic meaning of Northern Russia.

Russian oil and gas production is nowadays largely concentrated on the Yamal Peninsula. This is the location of Gazprom's modern Bovanenkovo gas field, which also supplies natural gas to Finland and the Baltic countries. There is a general look of affluence in Salekhard, the regional capital of the area: everything is new, big and clean in this city of almost 100,000 inhabitants.

President Vladimir Putin is arranging an Arctic forum in Salekhard this autumn, and has invited President Sauli Niinistö of Finland and other Heads of State to attend discussions focusing on environmental issues. Already at his first Arctic forum in Moscow 2010 Putin delivered a strong speech on what needs to be done to solve the environmental problems of his country. During our Polar expedition we heard that measures have especially been taken to remove hazardous waste from Franz Josef Land and Novaya Zemlya. 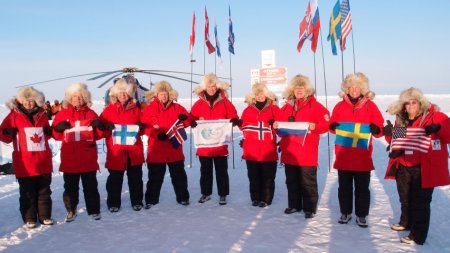 Russia's Arctic energy production has so far been land-based, though it has been announced that the Prirazlomnaya offshore oil platform will soon come on stream. The Yamal Peninsula is home to indigenous populations such as the Nenets, for whom reindeer herding is an important livelihood.

The Arctic Centre of the University of Lapland has been engaged for several years in research co-operation on the peninsula, seeking to promote the compatibility of energy production and traditional Nenets livelihoods (this includes planning pipelines to avoid disrupting reindeer migration routes). Indeed, Governor Kobylkin from the Yamal autonomous district addressed us warmly and at length about the indigenous peoples and how the position of their representative body, the RAIPON association, was threatened last winter. We also learned that this problem has now been resolved.

The Northern Sea Route is opening up, and so are the policies of Russia. Forecasts of how soon the ice on the passage will melt have regularly been surpassed in recent years, and the route will indeed soon become a cost-effective alternative. Last year some 1.2 million tons of goods were transported on 46 ships using the Northern Sea Route, with early figures suggesting a manifold increase in volume in the navigation period that began in June.

This traffic has so far been conducted on a trial basis, and has chiefly comprised shipments of oil, gas and extracted minerals. The approach has been more cautious for goods freighters on stricter schedules. This is nevertheless about to change as, for example, the major Danish container shipping company Maersk has announced that one fifth of its Suez traffic will move to the Northern Sea Route in future. This also poses a challenge for Russia, which is not yet fully prepared to meet the increasing demand. The country's icebreaker fleet is beginning to be outdated, and there is an urgent need for new icebreakers and other vessels that are fit for icy conditions.

The infrastructure as a whole requires considerable investment (harbours, charting of routes, navigation equipment, forecasts and observations of weather and ice conditions, satellite and other telecommunication links). At the same time the regulations, control systems and tariffs governing traffic on the route must be clearly specified.

The various needs associated with the Northern Sea Route are well known in Russia. Putin's new strategy tackles these needs, and new legislation has been adopted, including the founding of an administrative centre for the Northern Sea Route in Moscow. However, Russia will not be able to meet all of these challenges alone – at least not within the constantly changing schedule. This provides major opportunities for Finnish Arctic expertise. The Arctic partnership launched a few years ago between Finland and Russia provides enterprises and institutions with a flexible framework for concrete co-operation, and indeed the Northern Sea Route was the principal focus of the last partnership meeting held in Oulu. This discussion was continued in June at a partnership seminar in Archangel.

All of the governments of the member states and the representatives of indigenous peoples are agreed on the desirability of consolidating the Council, and Finland has also joined with Russia in proposing that the Council be acknowledged as a sovereign international organization. However, there is no agreement on the role of external stakeholders. Finland's position reflects the view that Arcticness is a regional issue that nevertheless has significant global dimensions (climate change, transport routes, fisheries, etc.). We regard the granting of observer status to countries and organizations that fulfill the council's criteria and show a well-grounded interest in the region as an essential aspect of strengthening the Council, and we consider it especially important to grant observer status to the European Commission. This is a subject on which the Arctic Council's meeting in Kiruna achieved a good solution.

Our expedition was accompanied by President Putin's special representative Artur Chilingarov, who bears the title of Hero of the Soviet Union and Hero of Russia and is a member of the Federal Council. Chilingarov is internationally renowned especially for his 2007 dive in a Finnish-made MIR-1 submersible to plant a Russian flag on the Arctic Ocean seabed near the North Pole. And indeed before even setting out we also agreed the details governing use of the flags of the Arctic Council and its member states regarding such aspects as size, order and display. For a few sunny hours after midnight the Arctic Council flew its flag to celebrate its "conquest" of the North Pole – before the southerly wind swept away all traces of our visit.