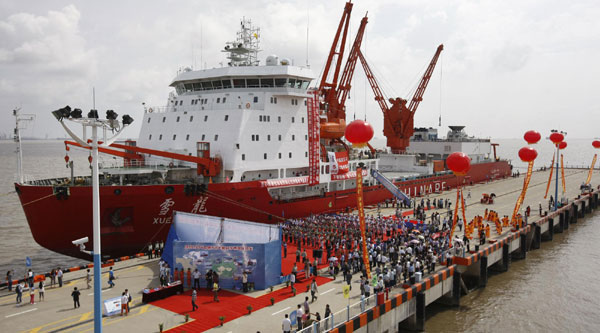 The historic voyage of the Xuelong, the Chinese icebreaker, was concluded yesterday when it returned to Shanghai. Xuelong, or the Snow Dragon, is the first Chinese vessel to complete a high-latitude voyage across the Arctic Ocean.

The Xuelong travelled 18.500 nautical miles during the three month voyage, including 5370nm in the Arctic Ocean.

A statement from the Polar Research Institute of China states that the expedition team has successfully performed various scientific research tasks. A total of 119 crew members were on board.
The researchers conducted a systematic geophysical survey, installed an automatic meteorological station, as well as launched investigations on oceanic turbulence and methane content in the Arctic area.

They also held academic exchanges with their counterparts in Iceland, and the two groups conducted a joint oceanic survey in the waters around Iceland.

The CHINARE5, Chinas Fifth National Arctic Research Expedition, left the Chinese port of Qingdao on the 2nd of July. It arrived in Iceland in August and spent four days in the country, opening the ship to the public both in Reykjavik and Akureyri, as well as co-operating on symposiums in both towns.
"It's the longest Arctic expedition we've ever had in terms of both sailing time and distance," said Chen Hongxia, a professor at the State Oceanic Administration's First Institute of Oceanography, who participated in the voyage.

China is designing a new icebreaker, which is scheduled to go into operation in 2014.