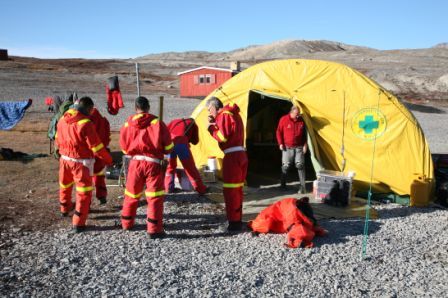 The Artic Councils website reports that all the ships, airplanes etc. were regional units normally operating in the High North nationally and in that context the exercise was conducted in a very realistic environment.

Every year 40 – 50 cruise ships sail among icebergs in cold waters where the temperature ranges from 0 – 5 degrees. These areas are also remote and far from dedicated rescue resources. The goal of the exercise was to test communications, equipment and procedures nationally and between the participating nations, to address the challenges caused by an influx into remote areas.

The exercise consisted of three phases. In the first phase, Greenland's Maritime Rescue Coordination Centre (MRCC) initiated a full scale search operation with aircrafts, ships and helicopters to quickly locate a missing cruise ship. Once the ship was located all efforts were focused on rescuing the passengers and crew from the wrecked ship. Fire fighters and medical personnel were flown in and parachuted.

Landing in the sea was necessary since no landing elsewhere was possible. On board the cruise ship the situation was chaotic with injured people, people in shock, fire and smoke but in the end all personnel were brought safely to land for further treatment. The last part of the exercise was evacuating a fairly large number of injured people to the nearest hospital in Reykjavik, Iceland around 500 km away.

For Denmark this exercise brings back memories of the loss of the passenger- and transport ship Hans Hedtoft. It disappeared in 1959 south of Greenland after a collision with an iceberg. The only item ever recovered from that was a life buoy which was later found on the coast of Iceland.

All in all the exercise was a success. Many procedures were conducted professionally and proven correct, but more importantly the exercise also revealed areas for improvement both at the national level but also between the nations in a large scale combined operation.

The aim being that the 8 Arctic states will be better prepared should a similar undesirable situation happen in reality.