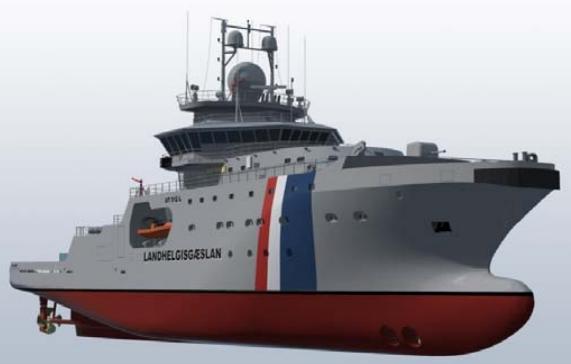 The Icelandic coastguard is strengthening its fleet with a new vessel. Named Thor (Þór) after the God of Thunder will be the most complete patrol ship of its kind in the North-Atlantic.

The multitasking vessel is strengthened for sailing in ice-laid waters and will strengthen search and rescue in the North-Atlantic. Iceland can play a big role in those activities in the future.

It will arrive in Iceland in September from Chile. An 8.8 Richter-scaled earthquake destroyed the shipping marine where it was built in February 2010, delaying the delivery for about a year. It will take almost four years to deliver the ship, including the delay.

Thor will have all the qualities of a tugboat and is well equipped for surveillance and all kinds of rescues.

"Thor will be a revolution for Iceland," Georg Lárusson, chief executive of the Icelandic Coast Guard told DV newspaper in Iceland.

"We are in a position where our environment is changing because of the melt of sea ice and the opening of the Northeast Sea Route. This ship will make us capable in taking part in shipping regarding these changes and taking part in projects associated with patrol in the increased traffic.”