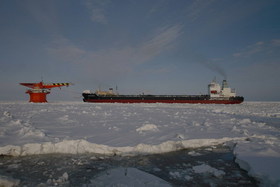 Barents Observer - The Sovcomflot Group (SCF), Russia's largest shipping company and one of the world's leading energy transporters, and China National Petroleum Corporation (CNPC), one of the largest oil and gas companies in the world, signed a strategic cooperation agreement in the energy transportation.

The agreement is founded on the Sovcomflot's experience in trans-Arctic shipping and will utilize the transportation potential of the Northern Sea Route, shipping hydrocarbons and transporting oil and gas extracted at Russian northern coast.

Both China and Russia have showed increasing interest in cooperation in the Arctic waters. Just lately, the Russians signed a treaty on maritime delimitation and cooperation in the Barents Sea and the Arctic Ocean with Norway. China on the other hand has actively discussed various aspects of Arctic shipping with, at least, Norway, Russia and Iceland.