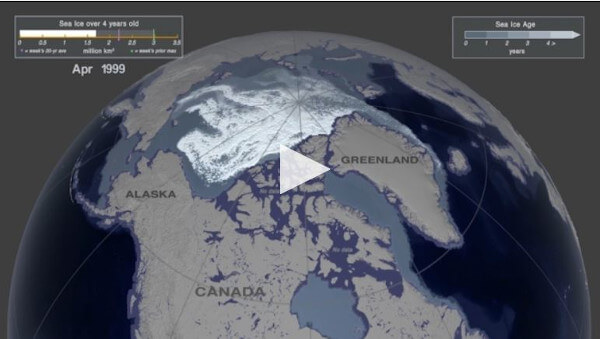 The newsprovider NRK recently published an alarming article based on data accumulated by the NSIDC and visualized by NASA about the dramatic change in sea ice prevalence in the Arctic Ocean over the past 35 years.

The data used for the visualization is from the year 1984 to the present portraying the area in the Arctic Ocean covered by sea ice as well as the age of the ice. The brand new or annual sea ice is portrayed in a dark blue color while the perennial sea ice or over four years old appears in white. The shades of pale blue in between the two extremes indicate ice of one, two or three years of age.

The perennial sea ice usually survives the summer season and can be up to four meters thick. In comparison the annual sea ice that forms over a single winter is often no more than two meters thick.

In 1984 the Arctic Ocean covered by sea ice older than four years was over 3.1 million square kilometers. In comparison in the first week of January 2019 that type of sea ice covered only 116,000 square kilometers. This means that perennial sea ice in the Artic Circle has shrunk by more than 95 per cent in only 35 years.

This is already affecting the area in many ways from environmental effects to cultural ones. For example coastal erosion is becoming more and more of a problem in the Arctic due to the diminishing permafrost that glues the sediments together and harsher waves from the ocean.

For the communities in the area the main issues are threatening of safety and livelihood of the people. The hunters can for example no longer rely on the ice.

If the loss of sea ice in the Arctic continues at this rate we could be looking at ice free summer Arctic around the year 2050 or even earlier around 2030 as some projections depicts. Climate change is affecting the Arctic dramatically by rising temperature that is twice as fast as for the globe as a whole and of the diminishing of sea ice.