Ecosystem service in the Arctic 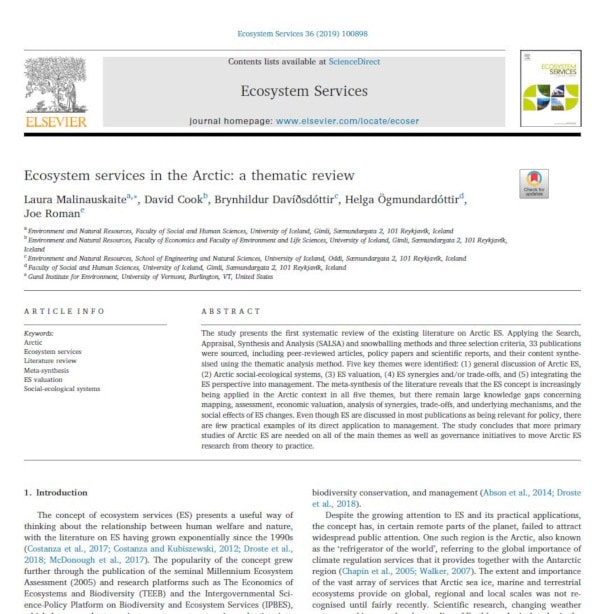 An interesting article on the Ecosystem service in the Arctic: a thematic review has recently been published and can now be found in our library. The article written by, Malinauskaite, Cook, Davíðsdóttir, Ögmundsdóttir and Roman presents a systematic review of the existing literature on Arctic Ecosystem Services (ES).

The study reveals that there remain large knowledge gaps concerning mapping, assessment, economic valuation, analysis of synergies, trade-offs, and underlying mechanisms, and the social effects of ES changes. It also concludes that more primary studies of Arctic ES are needed to move Arctic ES research from theory to practice.

"Despite the growing attention to ES and its practical applications, the concept has, in certain remote parts of the planet, failed to attract widespread public attention. One such region is the Arctic, also known as the ‘refrigerator of the world’, referring to the global importance of climate regulation services that it provides together with the Antarctic region. The extent and importance of the vast array of services that Arctic sea ice, marine and terrestrial ecosystems provide on global, regional and local scales was not recognised until fairly recently. Scientific research, changing weather patterns and improved understanding of Earth’s geological cycles in the twentieth century made apparent that not only the four million Arctic inhabitants depend on Arctic ecosystem services, but so do the rest of the Earth’s inhabitants. As natural resources become scarce globally, the attention of political leaders has turned to the Arctic, where climate change makes some more accessible. Like everywhere else in the world, trade-offs occur when extracting natural resources in the Arctic and increasing global interest in the region means that this is no longer an Arctic-only issue. Global forums, such as the Arctic Circle Assembly, which involve actors from a wide array of sectors and geographical locations outside of the Arctic, and the fact that global powers like China and the European Union have their own Arctic policies, are indicative of this impression.

In few places on Earth are the consequences of climate change more apparent than in the Arctic. A warming climate has left increasingly large areas of the Arctic Ocean ice-free in summer, which, together with thawing of permafrost and rising temperatures on land and water, is changing the ecosystems in unprecedented and unpredictable. With landscape and ecosystems, societies that depend on them are also changing: Arctic populations are confronted with challenges as well as opportunities presented by climate change, having to adapt to changes quickly to remain resilient. The notion of ecosystem services, with its perspective focused on the benefits derived from human-ecosystem interactions, provides a platform for examining the impacts of changes that are taking place in the Arctic. However, literature connecting the ES concept, especially its practical applications to Arctic policy-making, is still scarce. This paper provides a meta-synthesis of the existing literature that applies the ES concept in an Arctic context. Its principal objective is to map out existing publications on the subject since 2005 and list the main reemerging themes and gaps in the research so far. To the best of the authors’ knowledge, this meta-synthesis is the first attempt to provide a comprehensive overview of the existing literature on Arctic ES, and its outcomes will represent an orientation point for the commencement of future Arctic ES research projects."