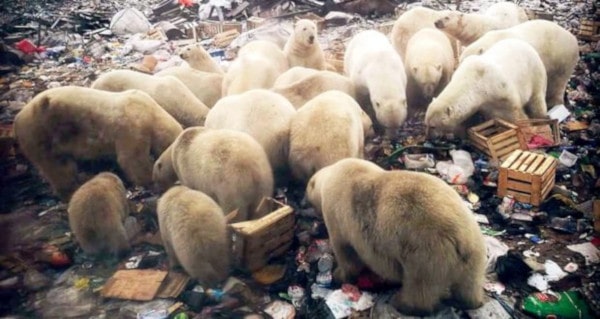 The authorities have declared a state of an emergency in Belushya Guba in northern Russia's Novaya Zemlya islands because of dozens of polar bears invading the settlement.

At least 52 animals have been spotted since December 2018 and between six and ten polar bears are constantly around and in the settlement. According to scientists and the authority nothing like this has been seen before.

The reason is they are finding food in the area and they have been photographed eating garbage. The expert that the Russian news agency TASS spoke to stated that the bears were migrating north but stopped in Belushya Guba to find food."Compared to previous years, they come ashore in the southern part of the archipelago, where the ice is changing. They migrate through Novaya Zemlya heading north, where the ice is solid," the expert said. "It is migration from the south to the north. They are staying in that location [near Belushya Guba] because there is some alternative food. They could have gone past but for the food. But as there are bins with edible waste, they stop to flock."

Eventhough the bears have been showing aggressive behavior and attacking people, killing them is prohibited because they are considered endangered species in Russia. The community is paralyzed by fear and people are afraid to go out and send their children to kindergarten and school although extra fences have been installed near the kindergartens.

Unfortunately, the bears do not fear any longer the methods used to scare them off. According to TASS an expert team has been send to the area to assess and prevent the bears from attacking people. If that does not solve the matter, they might have to cull them.