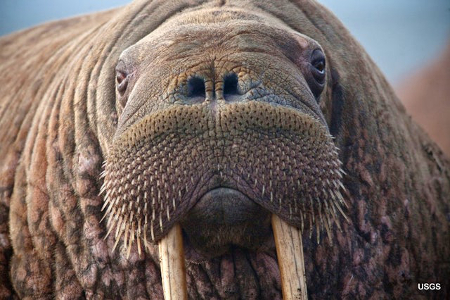 Massive gatherings of the marine mammals can result in stampedes that crush calves. Conservationists are pushing to have the animal protected under the U.S. Endangered Species Act.

Every august, thousands of Pacific walruses move from the chilly Chukchi waters and onto the barrier island of Point Lay, Alaska. At least, that’s how it’s been in recent memory. Historically, however, Pacific walruses would haul out onto sea ice to rest while they foraged for food with their young. But as the summer sea ice has declined in Arctic waters, more and more are coming ashore.

This year, by the end of the first week of August – the earliest on record – hundreds of animals had already settled onto the narrow stretch of land.

“The ice melted out beyond the continental shelf pretty quickly this year, and the remnant ice stuck around for a while so the animals were able to stay offshore until about August 3, at which point the first group hauled out,” said Jim MacCracken, supervisor of the U.S. Fish and Wildlife Service’s walrus program.

Such habitat changes are at the heart of a petition to see the species listed under the Endangered Species Act. The Fish and Wildlife Service must make a decision by the end of September as to whether or not to extend protections to the marine mammal.

In 2011, the Obama administration put the Pacific walrus – which faces threats from subsistence hunting, industrial development, resource extraction, tourism and climate change – and other species on a waiting list for protection. Some of those species had already been waiting more than a decade for protections, noted Shaye Wolf, climate science director for the Center for Biological Diversity. With scientific research showing that the Pacific walrus warranted protection, the center filed a successful lawsuit compelling the service to make a final listing decision by the end of the 2017 fiscal year.

He added, “They have denied the scientific reality of climate change, which is the primary threat to the walrus; listing it would force them to admit climate change is real and putting wildlife and people in danger.”

In addition, the Trump administration recently sought to reverse Obama-era protections that put most of the U.S. Arctic off limits to drilling for oil – a move that could directly affect walrus populations. New protection measures for the walrus could impact industrial activity in the Arctic. If listed, the Pacific walrus would enjoy critical habitat designations that would place restrictions on what federal government agencies and private entities can do in its habitat. The walrus could also benefit from protections for polar bear habitat – which overlaps a portion of walrus sea ice territory – that are about to take effect after years of legal battles. “That should help give some umbrella protections,” said Wolf.

Much of the argument for protecting walruses hinges on mitigating the long-term impacts of global warming on the species. Wildlife managers believe the Pacific walrus population to number around 200,000 – a fairly large population compared to many endangered species. But endangered species rules have been revised to look more at population viability, such as whether the animals can adapt to changes, rather than simply considering potential threats and dwindling numbers.

Though hauling out on land could signal a positive adaptation, marine scientists say such changes in behavior are https://www.newsdeeply.com/arctic/articles/2016/07/22/faa-to-pilots-do-not-disturb-the-walrus" href="https://www.newsdeeply.com/arctic/articles/2016/07/22/faa-to-pilots-do-not-disturb-the-walrus" target="_blank" rel="nofollow">not without risk. “These really large-scale haulouts are not normal behavior for Pacific walrus,” said Elisabeth Kruger, who oversees WWF’s Arctic and Bering Sea program. If something disturbs them – a person, plane, boat or bear – it can trigger a stampede into the water, which can crush vulnerable calves. “In addition, there is some risk for communicable diseases that we have not seen spread in the past.”

Walruses aren’t faring much better in the Canadian Arctic. In May, the Committee on the Status of Endangered Wildlife in Canada (COSEWIC) called for both of the Atlantic walrus populations in the nation’s High Arctic and Central-Low Arctic to be listed as a species of “special concern” under the federal Species at Risk Act. If listed, the government must create a management plan for the animal.

Unlike Pacific walruses, Atlantic walruses actually prefer to rest on land, rather than ice; in the Atlantic, the feeding grounds near the continental shelf are located closer to islands or the mainland. Scientists predict that walruses will continue to be able to access those feeding grounds, and that the loss of sea ice may even open up new areas. But hunting, industrial development and mineral and resource extraction continue to threaten Atlantic walrus populations.

“The walrus has been waiting and waiting, and things have only gotten worse,” said Wolf. “If the Trump administration refuses to list it, it would clearly be a political decision and not a science-based decision, which is required under the law. We would go to court. But in the meantime, the walrus doesn’t get protection.”