Songs for Decolonization: A Q&A With Saami Singer Sofia Jannok 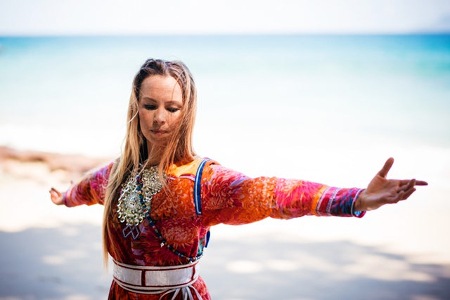 Born on the tundra of saapmi – the traditional homeland of the Saami – on land now a part of Sweden, Sofia Jannok, 34, feels the pull of her heritage in a modern world. At the age of four she learned joiking, the traditional Saami singing style, from a music teacher at school, and soon she began playing with the style, weaving in the modern elements of the music she liked to listen to – techno.

In the years since, she has embarked on a musical career fusing joiking with pop tunes and fresh beats, melding traditional and contemporary sounds. Singing in Saami, Swedish and English, Jannok weaves lyrics of home, identity and culture. Her latest album, “Orda: This Is My Land,” challenges colonial viewpoints with Indigenous stories, asking listeners to retell history. In the song “Snölejoninna” (Snow Lioness), Jannok sings in Swedish:

Do you understand that we don’t want to disappear

When we’ve lived here as long as the country can remember?

When the majority has power over us?

I want to be free.

Her work has won many awards, including the SKAP music prize, Prince Eugen’s Cultural Prize, the Nils-Aslak Valkeapää Music Prize, the Artist of the Year at the World Music Awards in Sweden and two Grammy nominations in Sweden. To give back, Jannok started the Árvas Foundation to provide scholarships for people in Indigenous communities working to support cultural revitalization and decolonization.

Arctic Deeply recently spoke to Jannok about the cultural and political influences that underpin her music.

Arctic Deeply: What was it like to grow up between the Swedish and Saami cultures in the North?

Sofia Jannok: I have grown up with reindeer husbandry. Having that upbringing created a strong foundation for my worldview, and I find it very useful in my life as an adult. I know who I am and where I come from, and I’m absolutely positive that I have rights to be this woman that I was born to be. I know that I have Indigenous rights, and that’s thanks to my mom and dad, not to any conventions of the U.N. or the constitutions of Swedish law.

The hard part to being Saami is it’s completely invisible once you step into the Swedish culture. It’s like, “Do you even exist?” It’s on those terms, that level of ignorance and invisibility. That has been, and still is, very challenging, especially living in a society that is considered the most democratic in the world.

Arctic Deeply: What role can music and other arts play in decolonization?

Jannok: It has a huge role to play since music is borderless. Music is kind of free, at least in our part of the world. You can break any limits you want to and it isn’t censored. But our history is censored. The history of the Saami people is covered very little, with one page at the most, in the Swedish school system, rarely with accurate information. The colonial history of Sweden, with the oppression and violence toward the Saami, is not covered at all in the Swedish school system. But I can put it in a song and tell the truth through arts. And I think that is a more efficient way, and actually truer too, because the politicians and people in power are always describing our society with a hidden agenda. I think it’s a better truth to listen to what people say. The truth lies within everyone’s stories and each story of a human being is the truth. It is important we get all kinds of truth – a diverse landscape of truth telling.

Arctic Deeply: Why do you choose to sing some of your songs in English and Swedish in addition to Saami?

Jannok: When I started writing in English and Swedish it was not conscious. I just started because in my head I turned to people in power. When I write in Saami I write in a way that the listener understands. In Saami I don’t have to say, “This is our land,” “We are still here,” because to the Saami, that is obvious. It’s like saying the planet Earth is round – you don’t have to mention it. But when I write in Swedish and English I have to write the most basic stuff. By the reactions of listeners, politicians and journalists, I realized how necessary it was that we actually use words so that people understand how really important it is.

It’s important, I think, to not only use language, but also symbols. In the video of “This Is My Land,” I climb a mountaintop and put down the Saami flag to claim the land. That is not something that my people have ever done. My people didn’t see that a piece of fabric gives us a right to be on this land. If that was the case, we would have done it as soon as the Ice Age was over. But we didn’t because nobody owns the land. The land owns itself and we are just here. In the video, though, I wanted to use symbols that the Western world has used to claim the land and to put themselves over other people. I used symbols that would be understandable to the people who I wanted to understand the video.

Arctic Deeply: What upcoming things are you working on?

Jannok: This fall I have some more touring to do in China but then I think I’ll take a few months off to start contemplating new music. I have so much to think about from visiting a lot of Indigenous communities in the past couple of years – I will be able to reflect on that to see if there is any music to be written. We’ll see.