Talking Art and Activism With an Accomplished Inuit Carver 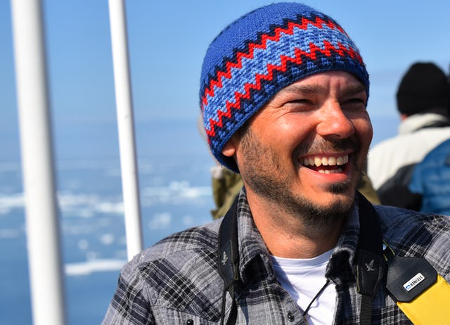 Meet Billy Gauthier, an acclaimed artist from northern Canada who participated in a hunger strike last summer to to protest the environmental impacts of a new hydroelectric dam in Labrador.

CANADA’S RENOWNED INUIT carver Billy Gauthier was working at a Labrador gas station two decades ago when his uncle handed him a valuable set of tools. Gauthier embraced the hand-held carving instruments, and his works are now featured in many public and private collections, including the National Gallery of Canada, the Museum of Anthropology at the University of British Columbia and the estate of former French president Jacques Chirac, according to Canadian Art magazine. The Newfoundland and Labrador Arts Council named Gauthier its emerging artist of the year in 2010, and a year later his first solo show, “Visions of Labrador,” sold out in 18 minutes.

Now 39 and living in North West River, Labrador, Gauthier captures the natural world through intricate detail and precise inlays. He works in stone, such as serpentine, anhydrite and marble, as well as materials like antler, tusk, teeth, sinew and bone from caribou, walrus, narwhal and unearthed wooly mammoths. The results are extraordinary.

“Nature is as much a part of me as my hand is a part of me,” Gauthier says. He fishes and hunts, and in the summer of 2016 endured a hunger strike that lasted nearly two weeks in defiance of the expected water contamination from a Nalcor Energy hydroelectric dam at Muskrat Falls now under construction. Protesters recently won a partial victory when the company agreed to clear vegetation from flooded areas to help lessen the release of methylmercury into the water and food chain downstream in Melville Lake. However, the company hasn’t agreed to protesters’ demands for an independent review or that topsoil also be scooped from the reservoir site.

Gauthier spoke with Arctic Deeply aboard the Ocean Endeavour, a 198-passenger ship operated by the Canadian expedition cruise line Adventure Canada, as we sailed east across the Davis Strait in late July. Gauthier served as an Inuit ambassador on board, explaining his art and culture to passengers. He was part of a panel on northern life, where he tearfully defended Inuit lifestyles and unpacked the persistent consequences of colonialism and poverty. He also created an original carving while on board, which was later auctioned for $4,800 with proceeds going to charity.

Arctic Deeply: What is it like to deal with the expectation of having to produce and complete a carving on board while people watch?

Billy Gauthier: People can watch me carve whenever they want, but if they have expectations that I am going to make something they want me to, in the way they want me to and in the time that they want me to … I am not going to rush a piece of artwork made from a piece of stone that took millions, sometimes billions of years to become what it is.

Arctic Deeply: You advised cruise ship passengers, when they make a shore visit, to buy only what they love and not to hand over money as an act of charity because they might pity a carver. What influence does consumer pressure have on an artist’s creativity and work ethic?

Arctic Deeply: Is it a straightforward demand like that, with artists being told what to produce?

Gauthier: There is absolutely no doubt. The other thing is many collectors want so many things so cheap. You can’t appreciate getting something for nothing. There is no pride in that. Pride only comes from hard work and overcoming struggle. Pride is earned, it is never given. You cannot give somebody pride.

Arctic Deeply: What effect does that have on a person’s artistic expression?

Gauthier: The easiest way to do it is to tell the artist to constantly push yourself, constantly raise the bar, raise your standards. The one with the highest standards generally does the best. It doesn’t mean they don’t fail. The one with the highest standards often also fails the most, but they often also achieve the most in the end, and then they also have a scale to look back at and say, “Now I can feel proud.”

Arctic Deeply: You have a strong connection to the natural world and, to protect it, you went on a hunger strike.

Arctic Deeply: You were asking Nalcor Energy, the provincial crown corporation, to remove vegetation and topsoil that, once the land is flooded, could lead to methylmercury contamination in wildlife stock such as fish and seal downstream in Lake Melville. How did the politicians mark their agreement with you?

Gauthier: We – myself and two other hunger strikers – wrote our demands down, sent them into our three Indigenous leaders as well as our premier. They got together and had a meeting. It was supposed to last an hour, and it lasted 12 hours. It was a win. There is no doubt in my mind – it was a win. People forget that when you are fighting a war, you have to win battles.

I realize it’s not over. I even said that to people, right away. It’s not over until the project is done and we are still eating the fish from the water and the seals from the waters. That’s when it’s over.

Arctic Deeply: If the dam is being built and the flooding is inevitable, is there a way to remove the dangerous elements from the soil first before it seeps into the water and enters the food chain?

Gauthier: Wherever the highest carbon content layers are, that’s the dangerous stuff. What you need to do is go in there with heavy equipment and remove these soils. It is the flooding of a huge area of land that doesn’t naturally flood that causes the problem, you see.