How Are We Now? Inuit Health Survey Returns to Nunavik 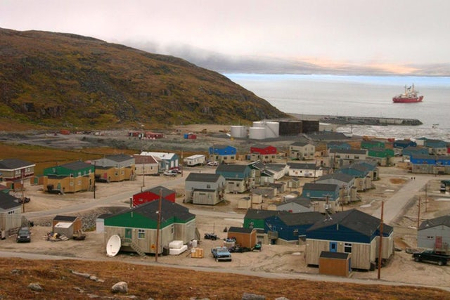 A health survey of Inuit communities in northern Quebec found widespread food insecurity and other problems 13 years ago. A follow-up now underway will see how much things have changed.

The ccgs amundsen, Canada’s Arctic research icebreaker, has begun a unique portion of its summer research schedule – visiting 14 remote Inuit communities along the shore of Hudson Bay and the Hudson Strait in northern Quebec as part of a large-scale survey of the population’s health and well-being.

The Qanuilirpitaa? (“How are we now?”) survey is examining the physical and mental health, nutrition, socio-demographics and lifestyle of people in the Nunavik region, through questionnaires and physical exams with nurses and public health researchers onboard the ship. “We want to get as much as possible a picture of an individual’s day-to-day life,” said Françoise Bouchard, director of the Nunavik public health department and the survey’s scientific codirector.

This year’s survey is following up on a previous survey in 2004. That survey, which involved around 900 adults over the age of 30, found that food insecurity and poor diets were common, as well as high rates of smoking and marijuana use, and mental health problems and violence.

The 2017 version will revisit as many of the 2004 cohort as possible – Bouchard estimates they should be able to reach around 700 of the original members – to see how things have changed over the past 13 years. It will also add another 300 people to that cohort and start a new cohort of 1,000 people aged 16-29.

But perhaps the most important new addition to the survey this year, said Bouchard, is a community profile survey, which will ask the participants about what they feel are the biggest assets, issues and resources in their community.

The results of the survey will give local leaders the data they need to argue for more resources for particular services, and help the regional health board improve its planning. Acting on issues identified in the 2004 survey, for example, the health board created a mobile breast cancer screening unit and developed guidelines for pregnant women eating traditional foods to help reduce exposure to environmental contaminants.

The survey will also help to establish a baseline for future changes in northern communities. With rapid economic development and climate change, it is important to know how people in the North are responding, said Bouchard. “The changes in the North are happening at a very rapid pace,” she said. “You can’t expect that not to have big impacts on health and well-being.”

To make sure the survey is asking the questions that community leaders want answers to, the local mayors and other leaders have been an integral part of the design process for the study, said Bouchard. The Nunavik region and local communities will also own and control access to all the data produced by the study.

Hilda Snowball, the mayor of Kangiqsualujjuaq, where the Amundsen is scheduled to visit on September 22, said that she plans to be involved in the survey as much as possible, to get information on how to improve services and provide more resources to her community. She is particularly interested in the results of the mental health studies. “Mental health is a big issue here,” she said. “I want to find ways for individuals to get more mental-health services.”

That kind of local involvement is exactly what Bouchard hopes the survey can spark. “From our perspective, it is important that the people in the community are the ones who take action,” Bouchard added. “The solutions to problems in the North will not come from the South.”