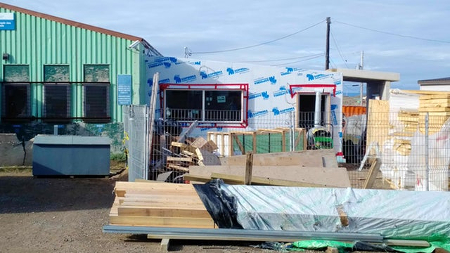 Opening a beer and wine store isn’t an obvious approach to addressing a community’s devastating relationship with drinking. But Iqaluit is taking that step in the hope of reducing consumption of bootlegged hard liquor.

It’s been more than 40 years since residents of Iqaluit, the capital of Nunavut in Canada’s eastern Arctic, could purchase and take home alcohol, but that will change when a beer and wine store opens this summer.

In a plebiscite held in Iqaluit in 2015, 77 percent of voters were in favor of operating the store as a three-year pilot project. But the debate over whether the benefits outweigh the potential for damage is far from over. In one corner are those who say Iqaluit already has bars and restaurants serving alcohol and creating the store will help curb bootlegging. In the other are residents worried that easier access to alcohol will add fuel to Nunavut’s already devastating relationship with drinking.

It’s a topic so divisive that Paul Okalik, the member of the legislative assembly for Iqaluit-Sinaa and Nunavut’s first premier, resigned as minister of health and justice in March 2016. “I cannot support an institution of selling beer and wine in my community where we don’t have the facilities to support those who may not be able to combat their addictions,” he said in his statement to the legislative assembly.

The consequences of alcohol addiction in Nunavut are well documented. The Baffin Correctional Centre, Iqaluit’s jail, reports that 95 percent of inmates who arrive at the jail have alcohol or drug dependencies, according to the 2017 Nunavut Crime Prevention Strategy. Nunavut had the highest rate of intimate partner violence in Canada in 2015, more than five times that of Saskatchewan, which had the highest provincial rate, according to Statistics Canada. It also had the highest rate of violence against children at six times the national rate. Front-line officers with the Royal Canadian Mounted Police estimate that up to 95 percent of police calls in the territory are alcohol-related.

The territorial government aims to reduce those numbers and encourage a healthier relationship with alcohol by providing easier and cheaper access to beer and wine, with the goal of minimizing the purchase of hard liquor from bootleggers, said Dan Carlson, Nunavut’s assistant deputy minister of finance, whose department is responsible for the Nunavut Liquor Corporation. This idea has had some success in other nations, such as Greenland.

“The idea is that if the government were to make it easier to access beer and wine and lower alcohol content stuff, then that might help with the main goal of helping people change their behavior towards drinking,” Carlson said. “If it’s easy and convenient to walk down the street and grab a case of beer, then maybe people will move away from buying a bottle of vodka out of a taxi cab in the wee hours of the morning.”

The store will require customers to set up accounts, allowing customer service agents to check identification and ensure individuals haven’t reached the daily maximum – up to two bottles of wine and 12 beers a day. Instead of browsing shelves, customers will choose their purchases from a list in the small storefront attached to the city’s existing liquor warehouse. “The person at the front counter types in your order and a couple minutes later, it will zing out from the back warehouse on a conveyer belt,” Carlson said.

Alcohol is outright banned in some Nunavut communities. In others, alcohol orders must first be vetted by a committee. And in unrestricted communities like Iqaluit, where alcohol is available in bars and restaurants, residents who wish to drink at home aren’t allowed to order alcohol from the city’s liquor warehouse. Instead, they must place an order with the Rankin Inlet warehouse and have it flown 750 miles (1,200km) across Hudson Bay. Similarly, Rankin Inlet residents must order alcohol from Iqaluit.

Ahead of the store’s opening, the liquor corporation is putting money toward social responsibility initiatives, including the Let’s Be Aware/Ujjiqsuqta campaign that promotes responsible drinking. “We think that if we can provide that help, provide that education, that basic information and that messaging, then that will help towards our goal of helping people change their approach to drinking,” Carlson said.

But some believe education campaigns fall short in a place where alcohol has caused so much misery. Okalik, a recovering alcoholic who quit drinking in 1991, said Nunavut needs its own treatment center. “Those ads have been on here and there for quite some time, they never really helped me,” he said in an interview. “What helped me was treatment.” Currently, Nunavut only has a mobile addictions treatment program in Cambridge Bay. Individuals seeking residential treatment can also be sent to centers in the South.

The Nunavut government issued a request for proposals in July for a company to develop ideas for a trauma and addictions treatment center. The closing date for proposals passed earlier this month.

Trauma and addiction often go hand in hand, said Janet Brewster, a longtime Iqaluit resident and activist who spoke in favor of the store during public meetings in Iqaluit. Helping people develop skills to cope with trauma is the first step toward addressing alcohol addiction, she said. “If we’re going to focus on any kind of a treatment program, I think what we should be doing is focusing on trauma treatment and mitigating those risks through giving people access to ways to deal with those traumas that lead to that addictive behaviour,” Brewster said.

Understanding trauma is key to understanding the role alcohol plays in Nunavut’s crime rate, said Peter Harte, a defense lawyer who spent eight years working in Nunavut before moving to the Northwest Territories in 2012. “Depending on the docket, anywhere from 75 to 90 percent of what’s in court on any given day has a connection to alcohol in one way or the other,” he said.

Harte’s clients often tell him about trauma endured throughout childhood, situations that can create “hypervigilance” where an individual’s senses are always on edge, resulting in chronic anxiety and stress. “With problems like hypervigilance, a shot of alcohol is a perfect solution to the psychological discomfort or anxiety disorder that you’ve ended up with as a result of what you’ve been exposed to as a child,” Harte said. “The challenge then is that nobody ever stops with a shot amongst other things because it’s an accepted way to kind of deal with stuff, to have lots of shots.”

Binge drinking in Nunavut is also higher than the national average. Brewster said she believes the combination of the store and public education will reduce binge drinking and help people foster a better overall relationship with alcohol. Carlson said the government will be monitoring the store’s data, but only time will tell if providing easier access to wine and beer is having an impact.

“By the end of the pilot, over time we should have a good sense of whether it’s been a beneficial impact on the community and should be extended, or whether we learn a few things and it should be modified, or if it’s an experiment that’s not working at this time and decide what to do with it then,” he said.

There is no official opening date for the store, but Carlson confirmed it would open before the end of the summer. Cambridge Bay and Rankin Inlet also voted in support of opening government-controlled beer and wine stores, but those plans are still pending approval by the Government of Nunavut.