Behind the Plan to Protect the Serengeti of the Arctic 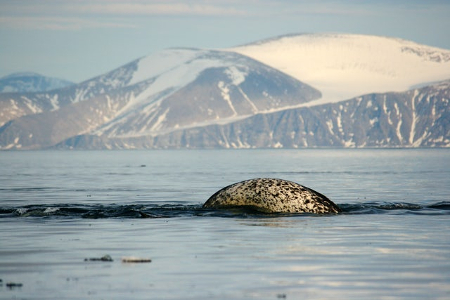 For nearly 50 years, Inuit in northeastern Canada have been pushing for federal protection of the fragile ecosystem in Lancaster Sound that they subsist on. The Sound, which forms the eastern gateway to the Northwest Passage, has been called the Serengeti of the Arctic for its rich diversity of wildlife, including narwhals, belugas and polar bears. It’s also believed to hold some of the world’s largest offshore oil reserves.

The Inuit’s perseverance finally paid off last week with an announcement by the Canadian government, the territory of Nunavut and the Qikiqtani Inuit Association (QIA) that Lancaster Sound – now to be known as Tallurutiup Imanga – will be protected by a national marine conservation area much larger than one proposed just seven years ago. Once enacted, the conservation area will mean a complete ban on oil and gas activities, as well as deep-sea mining and ocean dumping.

The announcement marks a triumph for the Inuit after decades of negotiation and, at times, strong disagreement over how the area should be managed. “We are patient people,” acknowledged P.J. Akeeagok, president of the QIA, which represents some 14,000 Inuit, including five communities within the conservation area, “but this agreement provides an amazing opportunity.”

The conservation area will span some 109,000 square km (42,200 square miles) – more than double what was first proposed by the federal government in 2010, after the Inuit went to court to block seismic testing – making it Canada’s largest protected area. The boundary expansion was based largely on Inuit traditional knowledge, said Akeeagok, gathered through interviews with hunters and fishers, some dating back as far as the 1970s.

“It’s one of the richest collections of traditional knowledge ever gathered,” he said, “and not just about migratory routes, but the travel routes of the Inuit, and their reliance on the narwhal and the beluga and the seal.”

“There’s a requirement that the local people actually benefit from the establishment of this protected area, and that’s really significant,” said Chris Debicki, an expedition leader and Nunavut projects director with Pew Charitable Trusts’ Oceans North Canada. “We’re hopeful we are going to see a new model of conservation come out of this.”

Stephen Williamson-Bathory, the QIA’s director of major projects, agrees: “This isn’t conservation just for the sake of whales, it’s conservation for the sake of improving people’s livelihood.” The final step before the marine conservation area can be enacted is for the federal government and the QIAto negotiate an impacts-and-benefits agreement. That agreement, Williamson-Bathory explained, is expected to be completed by March 2019 and will spell out details around federal support for local economic development and improved infrastructure.

Tallurutiup Imanga has long been considered a unique, globally significant environment. Bounded by ice-covered mountains, portions of the Sound remain ice-free nearly year-round, thanks to a convergence of ocean currents from the south. These open waters – known as polynyas – act as an oasis for whales, seals, walruses and other wildlife to feed and rest in. The area is also a critical stopover for millions of migratory seabirds.

It’s that abundance of wildlife that likely drew Inuit settlers to the area centuries ago. In the late 1960s, however, the federal government began issuing oil and gas exploration permits in the area, and Inuit communities became increasingly concerned about the potential impacts. The issue came to a head in 2009, when the Inuit successfully sued the federal government to block seismic testing. It was shortly after that that the first proposal was put forward for a marine conservation area.

Last year, conservationists got a major boost when Shell Oil, facing a lawsuit, relinquished 30 exploration permits, covering some 8,000 square km (3,100 square miles) to the immediate east of the Sound. “It just never sat well that we could have this terrific conservation area and right next to it we could potentially have a drilling platform,” said Debicki. With the Shell permits cleared, the door was opened for a much larger boundary for the conservation area.

The QIA ’s Akeeagok notes that formal recognition of the area’s Inuit name – Tallurutiup Imanga – is arguably just as important as the boundary expansion. The Inuktitut words, he explained, refer to a granite outcropping on Devon Island, adjacent to the Sound, that the Inuit believe resembles a woman with tattoos on her jawline – it’s a view he took in nearly every day from his childhood home in Grise Fjord.

“Oftentimes we’ll hear people call it Lancaster Sound,” Akeeagok said, “but to understand the true meaning of this area, it’s about the people who live here.”