A Look at Russian Reindeer Herders’ Battle with the Bottle 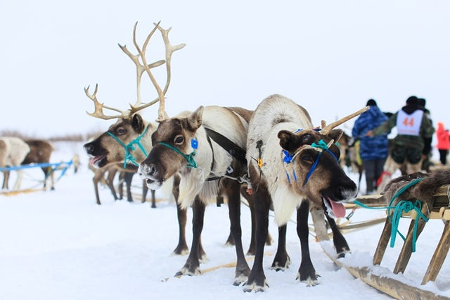 Nenets reindeer herders have some counterintuitive strategies to lessen the harm of heavy drinking, but these approaches are creating problems as nomads settle into villages.

“The sooner you drink it all, the more time you will have thereafter.”

Anthropologist Kirill Istomin encountered this phrase during his fieldwork with Nenets reindeer herders in Russia’s Taz tundra, which sits on the southern cusp of the Gydan peninsula in the district of Yamalo-Nenets Autonomous Okrug. From 2006 to 2012, Istomin worked alongside herders and observed them as they traveled through the tundra. He says the phrase captures a popular logic to the Taz Nenets’ use of alcohol: The more quickly alcohol is consumed, the more quickly important tasks can resume.

For the herders, spring and summer months are marked by regular cycles of abstinence from alcohol as they maneuver through pastures deep in the tundra and far from villages, where alcohol pervades.

During the cold winter months, as herders migrate close to village centers, Istomin observed a deliberate orientation of camps as far from the village center as possible. Although this placement of the camps serves to protect reindeer from dogs and poachers, the herders expressed another purpose: to distance themselves from the lure of alcohol.

Far from being passive victims of alcohol-related ills, or the vagrant alcoholics captured by Russian stereotypes (“Reindeer herders are sober only when they do not have money to get drunk,” Istomin once overheard in the village), the herders were devising strategies to minimize the harm alcohol carries into community life.

Nenets herders are not the only communities finding ways to curb the harm caused by alcohol in the Russian north. At both federal and state levels, policies to restrict the supply of alcohol are being implemented – with more than 100 villages opting for complete bans on sales on certain days. Others, such as a village in the Chukotka district settlement, have banned the sale of alcohol entirely.

These measures may be working. Although Russia remains one of the top consumers of alcohol per capita in the world, there is an observable nationwide decline, according to data from the Russian government. However, that is not the case in the northwestern regions of the Russian Arctic, where alcohol consumption has remained stable – and high.

In the Nenets Autonomous Okrug, which lies northwest of the Yamalo-Nenets Autonomous Okrug, per capita alcohol sales between 2010 and 2012 were more than 3 gallons (12 liters) of pure alcohol per person, higher than its predominantly Russian neighboring state, Arkhangelsk Oblast. Though Istomin cautions that new monitoring and restrictions on alcohol may be inflating numbers, they’re still concerning.

Currently, in the Nenets Autonomous Okrug sales of hard liquor and wine are forbidden between 8 p.m. and 11 a.m., and on Sundays, which is slightly more restrictive than the nationwide ban between 11 p.m. and 8 a.m.

Yury Sumarokov is a senior public health officer at the Northern State Medical University in Arkhangelsk. He wants to see more robust restrictions on alcohol consumption, through both availability and price. “Now alcohol is available everywhere in the Far North,” he explains. “We should introduce local restrictions that are specific to the region.”

For the far northern states, which tend to have higher proportions of Indigenous populations, there’s an urgency to the matter. Disproportionate effects from alcohol within Indigenous communities have been well-documented across the Arctic, and Russia is no exception. One researcher found a 147 percent increase in the number of alcohol-induced psychoses between 2002 and 2012 in the Yamalo-Nenets Autonomous Okrug.

Sumarokov has studied the link between high rates of suicide and alcoholism in Nenets Autonomous Okrug, where he found alcohol in the blood of over 92 percent of female, and 78 percent of male, Indigenous suicide cases. Research shows that this link is stronger among Nenets living in urban areas.

“Being lost between the Western lifestyle and traditional Nenets culture may constitute one of the highest risks for suicide,” he explains. Conversely, research shows that traditional practices can protect against addiction – by fostering a strong sense of belonging, social cohesion, economic stability and culturally specific solutions, such as Nenets camps keeping a distance from villages.

Istomin, who works out of the Komi Science Center in Russia, has also studied the link between suicides and alcohol. His research was spurred by the death of one of his young Nenets research subjects, who was just 17 years old. Two years before his death, the boy left boarding school and migrated to a village, where his alcoholism began.

Istomin notes that while the “drink-it-quickly” strategy observed among Nenet herders may be adaptive in the context of nomadic living, it can create problems in a village setting, where spirits are widely available in shops. But this is not only due to the presence of alcohol, Istomin said. Nenet herders are often marginalized when they settle in predominantly Russian communities. With lower rates of education, finding a job can be difficult. Practices that worked out on the tundra can suddenly become isolating, and mental illness can ensue.

Wariness of mental health treatment may also be delaying responses. “For a long time in Russia, it was not deemed necessary to undergo highly specialized treatment for mental diseases like depression,” Sumarokov wrote in an article for the International Journal of Circumpolar Health on alcohol and suicide in the Nenets Autonomous Okrug and Arkhangelsk Oblast. As a result, mental illness can often go undiagnosed. “Depression is not something people talk about; it is seen as a weakness that should be concealed.”

Another challenge, common to many Arctic communities, is that there is only one medical center that provides addiction and psychiatric services in Nenets Autonomous Okrug, located in the town of Naryan-Mar. While, like all Russians, Nenets have access to free healthcare and education, the delivery of those services is limited in the Far North, where roads and highways are sparse. As a result, those suffering from mental illness may choose cheaper and more widely available forms of self-medication.

Istomin hopes that his work can contribute to a shift in understanding of alcohol’s presence in Arctic communities. Though alcoholism may be linked to imposed forces, such as education at Russian boarding schools, and to shifts in the local economy, Istomin’s research begins to explain how these outside forces lead to heavy drinking or suicide in ways that are unique to Nenets communities. He hopes the solutions can be equally unique.