NASA Puts a Laser Focus on the Melting Arctic Ocean 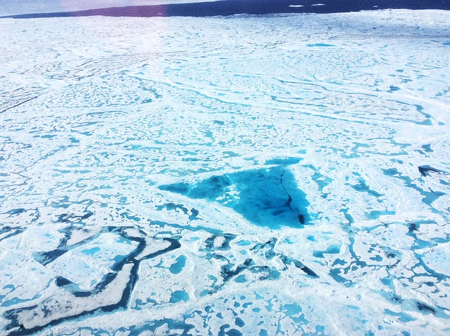 How the albedo effect works in the Arctic Ocean has been the subject of intense research for decades, and, at this point, is pretty well understood by both scientists and fifth-graders. As sea ice melts, the newly open and dark ocean absorbs solar radiation, rather than reflecting it. That heats up the Arctic and exacerbates the effects of climate change. But in recent years scientists have come to believe they may be overestimating the reflectivity of the remaining white sea ice.

Indeed, as sea ice melts, it forms dark melt ponds on the surface of the ice, which act as their own microcosm of the albedo effect, possibly speeding up sea ice loss. However, few studies have been done on these ponds in the Arctic, given the danger of using watercraft on the ponds’ surface when lakes can drain suddenly and without warning.

That’s why, on July 17, scientists departed Thule Air Base in Greenland on board NASA’s Guardian Falcon aircraft for a summer campaign of Operation IceBridge in hopes of figuring out how deep these melt ponds are and how they’re forming, as well as examining changes in the multiyear ice pack during the summer months for the first time. Over a two-week period, they conducted six flights over the Arctic Ocean, assessing sea ice health and experimenting with lasers to see if it’s possible to chart the depth of aquamarine melt ponds, which are often visible from space but impossible to study through satellite imagery.

Arctic Deeply recently spoke with Operation IceBridge’s project scientist and NASA sea ice researcher Nathan Kurtz about the mission and how this new information could be used.

Arctic Deeply: Can you provide a brief background of Operation IceBridge?

Nathan Kurtz: Operation IceBridge started as a gap-filling mission between NASA’s IceSat-1 satellite, which launched in 2003 and ended in 2009, and the successor satellite, IceSat-2, which is not scheduled to launch until next year. IceSat-1 took laser altimetry measurements to get the height of the Earth’s surface for when we’re measuring changes in ice thickness and volume. IceBridge is an airborne mission to get similar kinds of measurements between those two missions, but additional ones as well.

Arctic Deeply: What do you use to obtain these measurements?

Kurtz: We use a variety of different measurement techniques – laser altimetry, radar, telemetry – to look at changes in ice thickness and what’s causing those changes. The laser altimetry will look at how the surface is changing so we can get a sense of how ice thickness is changing; the radars will look at the shallow layers, like snow accumulation on the ice sheet, which warm and can shrink the ice. Essentially, we use a set of measurements to see how the ice is changing.

Kurtz: The summer campaign is very different from winter campaigns – we have much fewer instruments; we only have cameras on board and the laser altimeter. And specifically we’re measuring the Arctic sea ice when it’s melting; there’s a lot of meltwater on the surface. We’re not necessarily looking at how thick sea ice gets when it’s at its maximum thickness, but we’re looking at quantifying what happens during melt season. Especially we were looking at melt ponds – seeing if the laser can sense how deep these pools of water collected on the surface are.

This campaign was also flown out of Thule, Greenland, and so we can only access the multiyear ice up there. I flew over some of the oldest ice in the Arctic. We’ve never done it in the summer before – our summer campaign last year was based out of Barrow, Alaska, where we mostly flew over seasonal ice.

Arctic Deeply: Why is it important to look at multiyear compared to first-year seasonal ice? What are some of the differences you might observe in a mission?

Kurtz: The multiyear ice is much thicker and it tends to be more rough and ridged. The multiyear ice is what survives throughout the summer and that’s what’s been decreasing a lot in the past few decades. We’ve seen a strong decrease in areas that used to be covered by ice. It used to be that about 70 percent of ice in the Arctic Ocean was multiyear ice – now it’s down to somewhere around 20 percent. That change has a pretty big impact on the climate.

When the ocean is covered with ice year round – especially during the summer when the sun is above the Arctic Circle all the time – a lot of the sun’s energy is reflected back out to space but when that ice starts to decrease the open water absorbs a lot of the sun’s energy, which basically leads to heating of the Arctic. Temperatures in the Arctic have increased two to three times the global average temperature increase and it’s due, in large part, to this albedo effect.

Kurtz: A recent paper explored how melt pond formation, especially early on in the melt season, was a strong predictor of how much sea ice would be left at the end of the summer. These melt ponds and their formation impact how much energy is absorbed by the surface, as well. How these melt ponds are structured, how deep they are, and how spread out they are are important parts of determining how much energy is going to be absorbed and how that factors into the melting of the ice. Measuring that is something that’s been very difficult to do until now.

Arctic Deeply: How do you measure the depths of the melt ponds?

Kurtz: We have a green laser – a green light will go through water when you shoot it at the surface. You’ll get a reflection from the pool surface and then it will go through the water and you’ll get a reflection of the bottom surface. That shows up as peaks. By looking at the difference in time between the two peaks, we’re able to convert that time to distance so we know how deep the melt ponds are. The goal would be to quantify their depth and volume of water. Right now, we don’t have information for a baseline for change because this hasn’t been done before. These measurements could potentially be used for a baseline later, but we’re also looking at whether models that incorporate melt ponds in them are interpreting what’s actually happening correctly on the ground. If they aren’t, we need to refine how the models are done. If they are, that means that component of the model is correct. I suspect it will probably be somewhere in between. We want to see how we can make the models a bit better.