Exploring the Mysteries of the Arctic’s Sea Unicorn 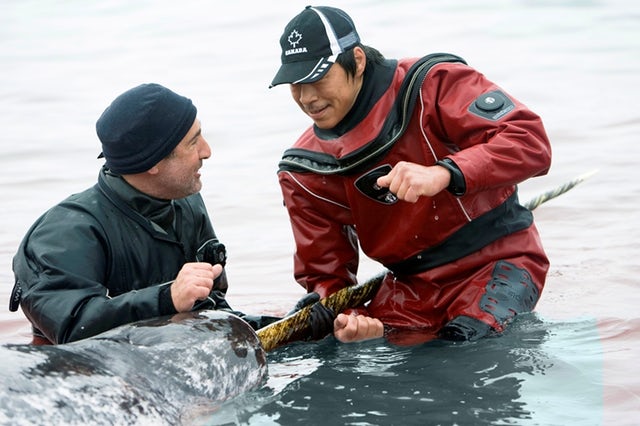 A new exhibit at the Smithsonian National Museum of Natural History examines the narwhal’s role in indigenous culture and the possible reasons behind its unusual tusk.

Most people know that polar bears are threatened by climate change. But few are aware that narwhal whales – the so-called unicorns of the sea, which are relied on by northernmost Inuit communities for subsistence and cultural survival – could be even more vulnerable.

A new exhibit at the Smithsonian National Museum of Natural History in Washington, D.C., aims to bring much-needed attention to the narwhal and the imminent threat it faces with climate change. The exhibit, “Narwhal: Revealing an Arctic Legend,” also explores an enduring mystery about narwhals: What exactly is the purpose of that saber-like tusk sticking out of its head?

“It’s an animal to be watching very closely because it’s so closely tied to pack ice, which is certainly receding in most parts of the world,” said William Fitzhugh, curator of the exhibit and director of the Smithsonian Arctic Studies Center, who has studied Inuit cultures for nearly 50 years.

There are an estimated 180,000 narwhals in the world today. They spend their entire lives in Arctic waters near Canada, Greenland and Russia, following the edge of the sea ice, which they dive below to feed on halibut, cod and squid. It’s that narrow migratory path and specific diet that makes them especially vulnerable to warming waters and changing sea-ice patterns, Fitzhugh said.

Narwhals could also face new predators. A study published earlier this year found that killer whales, which historically avoided ice-covered Arctic waters because of their tall dorsal fins, are now venturing further northward and potentially preying on narwhals. What’s more, there’s concern that climate change could bring new diseases to the Arctic that affect narwhals and other whales.

While few of us will likely ever see a narwhal firsthand, Fitzhugh hopes the Smithsonian exhibit will help to shine a light on the mythic whale. Visitors are greeted by an 18-foot, life-sized model of a male narwhal suspended from the museum’s ceiling. The exhibit also features a collection of narwhal skulls and fossils, panoramic images of the narwhals’ icy environment and soundscapes of the whale’s calls.

The aspect that Fitzhugh is most passionate about, however, is a series of Inuit carvings and artworks, which he said highlights the important connection between narwhals and northern cultures. Hunting “is what holds those northernmost communities together,” he said. “When they catch [a narwhal], the pieces get spread far and wide in the village. They’re the glue that holds the social unit together.”

The blubber and inner skin from narwhals – known as muktuk – is considered a delicacy among Inuit people, and provides an important source of vitamins C and D. The meat from narwhals is also used to feed sled dogs, while the tusk is often carved into harpoons and other cultural artifacts.

In recent years, scientists have increasingly turned to the Inuit as a source of knowledge and information, Fitzhugh said. Narwhals are one of the least understood mammals in the world, largely because they live in a remote, challenging environment. While scientists might parachute in for a week or two, Inuit have lived with narwhals for millennia and know the animal’s behavior intimately. “They observe a lot – they witness how the narwhal play together, where they feed, how they rub their tusks, for example.”

It’s the narwhal’s tusk – which is actually a giant front tooth, and only grows on males – that may be biggest draw of the Smithsonian exhibit. Spiralling like a candle, and up to 10 feet long, narwhal tusks were once sold by Vikings to European royalty as magical unicorn horns, fetching more than the price of gold. Queen Elizabeth I of England is said to have paid an entire castle’s worth for one particularly long specimen.

It wasn’t until 1577, when English explorer Martin Frobisher discovered a narwhal corpse while searching for the Northwest Passage, that the real source of the horns was identified. Yet to this day, scientists have yet to agree on the tusk’s purpose. The Smithsonian exhibit explores three of the main theories: that the tusk is used by males to joust with each other; it’s used to signal sexual potency and attract females; or the tusk has a sensory function.

It’s the latter that Martin Nweeia, a Connecticut-based dentist and narwhal researcher, who co-curated the exhibit, believes is its true purpose. “Like all teeth, it’s multifunctional, but the narwhal’s tusk is primarily a sensory organ,” he said. Nweeia’s research has mapped out a dense pattern of nerves in the tusk that can detect changes in water salinity, and potentially other chemical properties. A recent genomic study, the results of which are shown at the exhibit, supports this finding, Nweeia said.

But Fitzhugh is quick to point out that the exhibit is meant to be more than just a curiosity piece. “We’re looking at the narwhal as a symbol of how we can learn and work together,” he said, “and how much more is gained by collaborative research.” The exhibit is expected to run until 2019.