Robots to the Rescue? Drones Could Help With Arctic Search Operations 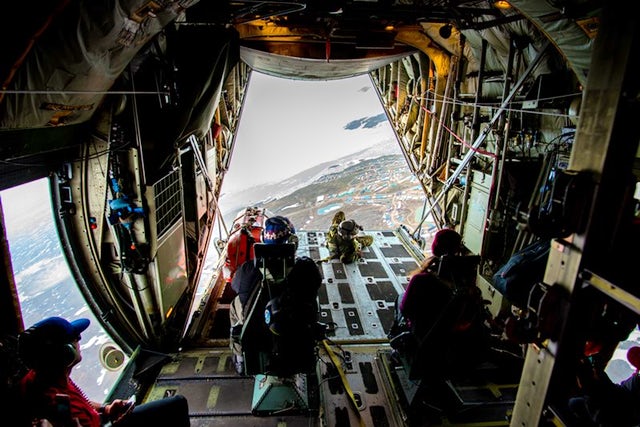 When a hunter goes missing near the remote hamlet of Arviat, Nunavut, volunteer search-and-rescue operators have few options. First, they’ll contact Nunavut Emergency Management to come up with a response plan. Then, they’ll hit the ground. If they’re lucky, the missing person will have triggered a satellite beacon, or had enough cell reception to ping home. The Coast Guard and Canadian Air Force are typically too far away to help with rescues. Ground crews will look for abandoned snowmobiles or ATVs, and search for footsteps nearby. But in a region where temperatures drop to -30 C (-22 F), time is of the essence.

That’s why researchers like Dylan Clark, who recently returned from Arviat, are wondering if there might be a better – and quicker – way to track down missing persons by using unmanned aerial vehicles, or UAVs, better known as drones. Clark, who is part of McGill University’s Climate Change Adaptation Research Group, has spent the past few years analyzing search-and-rescue data in Nunavut from the past decade. After noticing a jump from 111 searches in the territory in 2006 to 251 in 2015, Clark began investigating what was driving the increase – and what could be done. But deploying drones in the Arctic to search for hunters led astray poses a series of technological and regulatory challenges.

Though the Arctic landscape is changing at a rapid rate – lakes no longer freezing up, permafrost thawing and shrubs expanding – Clark found this wasn’t the main driver of an increase in search-and-rescues in Nunavut. Rather, more than half of rescue operations in 2013 and 2014 were due to issues with equipment failure. “Newer machines are more susceptible to breakdown out on the land,” said Clark. “Historically, people would have been able to fix them and get back into town, but the transition of knowledge and changing environment are components as well.”

Most often, searches occur in the spring and fall when travelers may become stuck in slushy areas, or farther north, stranded by shifting ice floes. During times of duress, traditional knowledge may not be as helpful when environmental cues have changed.

In best-case scenarios, lost travelers and hunters are carrying location-tracking SPOT devices or phone home, as cell coverage expands across the Arctic. In worst cases, family members must alert authorities when their loved one didn’t arrive home at their scheduled time.

“We’re trying to figure out what could [drones be used for],” said Clark, adding that not a lot of research has yet been done on the subject in the northern stretches of Canada. Some work has been focused on the use of UAVs for oil spill detection in Arctic waters, but search-and-rescue is unknown territory. “There are limitations we’re noticing already – particularly around weather,” he said.

Most drones can’t fly for more than 30 minutes at any one time without their batteries freezing up. And while more expensive models may do better, cash-strapped Nunavut communities would likely be investing in cheaper drones, at a cost of around $1,000.

Another challenge is the aviation regulations in Canada, which prohibit the use of UAVs in some places. For trial runs, researchers have been able to get permission from Transport Canada, but this could become more complicated if incorporated into search-and-rescue. There are also issues with liability insurance, said Clark, noting polices can cost upward of $100,000 and create a significant barrier to entry for communities.

That’s why a combination of technological advances and traditional knowledge is probably best. Workshops are increasingly being held across Nunavut for youth to learn survival skills from experienced elders and hunters – first aid, how to recognize hazardous weather conditions, how to build an igloo and how to hunt.

However, there has been a recent drop in how many travelers carry SPOT devices when they head out. Only one-third of search-and-rescue attempts in 2015 involved a SPOT device – down from 41 percent the previous year. These are the kinds of cases in which drones might be helpful.

Both Arviat and Pond Inlet have created community initiatives to get youth out onto the land with hunters and elders on four-to-five-day excursions. “A lot of these communities have started to build resilience by using Inuit traditional knowledge for both safety and as a social dimension for youth who enjoy being out there,” said Clark. In addition, the Nunavut government is pushing for more people to carry SPOT devices with them. Drones are just another piece of the puzzle in creating a safer Arctic amid social, economic and environmental changes.

“This is a tool we’re exploring with communities that will potentially have some benefits, whereas there are other cases where it wouldn’t work as well,” said Clark. “We want to pull together as many tools and resources as we can to support search-and-rescue volunteers.”