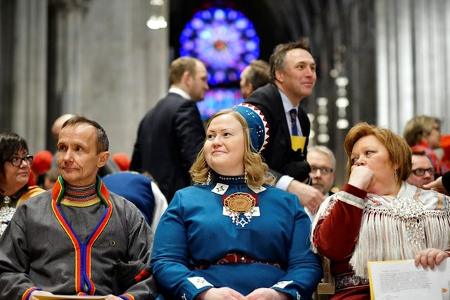 A new railway project would help Finland and Norway take advantage of melting sea ice to ship products from the Arctic coast. But Indigenous communities fear the rail line would disrupt their reindeer herding traditions.

Indigenous saami communities are expressing concerns about a proposal to build a railway across northern Norway and Finland, saying that the line would disrupt their reindeer herding traditions.

The $3.4 billion, 526km (327 mile) project would run north from Rovaniemi, Finland, to the Barents Sea port city of Kirkenes in Norway’s far eastern Arctic. The railway – called the Arctic Corridor project – is touted as a way to take advantage of melting sea ice by moving raw materials to the Arctic coast and then east, along Russia’s Northern Sea Route, to markets in Asia. It would also ease the transportation of Arctic oil and gas from Norway and Russia into Scandinavia and the rest of Europe.

Two of the line’s potential routes northward through the Finnish Arctic would cut through Saami territory in the heart of Lapland, according to Tiina Sanila-Aikio, president of the Saami Parliament. “That will mean there are many collectives that are divided into two pieces,” forcing herders to move skittish reindeer across the line to get to pastures on the other side, she said. “Here, where the reindeer are all year round really in the nature, there haven’t been solutions – how to secure [so] that these trains are not killing the reindeer.”

Despite a provision in the Finnish constitution regarding negotiation with the Saami Parliament on “use, leasing and assignment” of state-managed lands in traditional Saami territory, the Finnish government did not consult Saami leaders before requesting an assessment of the Arctic railroad project from the multinational Nordic Railways Co-operation Forum, Sanila-Aikio said.

But Saami do have a presence on the regional council that conducts land use planning in Lapland, which would be involved in approving the rail line, Timo Lohi, a spokesperson for Arctic Corridor, said in an email. “There is a joint steering group which guides the regional planning work. Saami Parliament is represented,” he said.

“There will also be a separate Akwe:Kon group, which will follow and evaluate [the] possible influence on Saami culture,” Lohi added. “Akwe:Kon” refers to voluntary guidelines under the United Nations Convention for Biological Diversity for assessing the effects of industrial development projects on lands and waters in Indigenous homelands.

Sanila-Aikio said that while the railway proposal has floated around for a decade, “now, when Finland has become the leader of the Arctic Council, this discussion has got new force.”

The Saami herding collectives are already struggling economically, she added. “If this thing should come, it would impact so much that we cannot, anymore, herd reindeer on those areas.”

Sanila-Aikio sees a link between the newly energized interest in the railway and Finland’s revised forestry law. Passed in 2016, the law shifted some forest and water oversight from Metsahallitus, the Finnish interior agency, to a semi-public entity prioritizing logging, gravel mining and other extractive industries. Although the revised rules encompass forests and other lands within Saami territory in northern Finland (where the government manages about 90 percent of the boreal forest), legislators removed a requirement to consult with the Saami on new projects before passing the measure.

“This railway, if it’s going to Kirkenes, to Norway, it will go either to the western or the eastern side of Inari Lake. So that will mean there are many [herding] collectives that are divided into two pieces,” said Sanila-Aikio. “The forestry, mining and tourism industries are the ones benefiting from this railway. They have much more economic power than reindeer herders.

“I think this is also a matter of security, because we are living next to Russia,” she added. “It’s an effective way to cover these areas in a war situation.”

Nicholas Tyler, a wildlife biologist and reindeer expert, said that a north–south rail line in this part of the Arctic would continue the decades-long degradation of habitat crucial to the health of Arctic wildlife populations, including some of the reindeer herds managed by Norwegian and Finnish Saami. “Infrastructure development in the North is the single greatest man-made threat to northern ecosystems,” said Tyler, a professor at the Arctic University of Norway.

“This includes everywhere from the Pacific Ocean right across the New World, into Scandinavia. A railway is just another turn of the cog in the ratchet, which means yet more habitat is lost.”

A fence along the Norwegian-Finnish border has blocked reindeer from moving between their traditional seasonal pastures for nearly seven decades, said Tyler. “The Finnish reindeer are no longer migratory, so in that sense, you could say, well, they’re not going to cross the railway line anyway, because we’ve already stopped the migration,” he said.

But it would change the behavior of wildlife for thousands of hectares along its entire length, according to Tyler, and possibly have a “profound” negative impact on herds and herders in the immediate vicinity of the line.

“It’s the avoidance effect that is absolutely central here,” he added. “All the measurements that exist show that animals tend to avoid an area of one or two kilometers on either side of structures like this. There will be animals there, often mainly young males, but the farther away you get, the more you find.”

At its current projected length, the Arctic Corridor railway would affect wildlife across over 2,000 square km (772 square miles) of wilderness, mostly in Finland, with much of it already broken up by roads, highways and other structures.

“Each piece of infrastructure that is built – a road, a power line, a railway, a ski resort, mountain huts – every single one of them has this invisible magic line around it,” Tyler said. “When you link all those up, it’s a major area of habitat not destroyed, but progressively taken out of use.”