Keeping an Eye on What the Arctic Throws Down Iceberg Alley 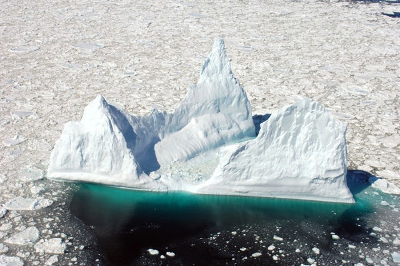 On the night of April 14, 1912, 600km (375 miles) south of Newfoundland, the RMS Titanic hit an iceberg in the North Atlantic Ocean. The ship, an investigation would reveal, had failed to follow ice warnings from other ships passing through the dangerous region, likely in hopes of an early arrival in New York City. The disaster, which resulted in the loss of 1,517 lives, was the catalyst for the founding of the International Ice Patrol under the International Convention for the Safety of Life at Sea the following year. “Of the vessels that heed our warnings, none have struck ice since Titanic,” said Gabrielle McGrath, commander of the patrol.

As a joint initiative between the United States Coast Guard and Canadian Ice Service and funded by 13 nations with a stake in trans-Atlantic navigation, the ice patrol has monitored icebergs floating down into the trans-Atlantic shipping lanes from the Greenland Ice Sheet since 1914, providing frequent updates to ships traveling the treacherous corridor. The past four years have exhibited “extreme ice” levels in the area around Newfoundland’s Grand Banks, the only area in the world where icebergs directly intersect with shipping traffic. With thousands of icebergs in the area, compared to only a few dozen in some years, the service is more important than ever, and maritimers are pushing for enhanced satellite coverage to safely guide their ships to port.

Every year, beginning in February, the Coast Guard sends out airplanes to conduct ice reconnaissance flights. On average, planes will fly over the area every five days for up to nine hours at a time, covering more than 77,700 square km (30,000 square miles) of water per flight. That information is plotted onto iceberg charts from the North American Ice Service that predict iceberg drift and used to estimate the limit of all known ice in the Grand Banks. This information is then broadcast out to mariners via radio and an online Ice Bulletin.

“The mariners looking at our ice charts are not familiar with being near ice; they do not want to see ice,” says McGrath. “They want to get across the Atlantic without interacting with it.”

This spring, for example, saw an explosion of icebergs around Newfoundland. On March 27, there were just 37 icebergs in the shipping lane – but when sustained, counter-clockwise, hurricane-force winds picked up directly overhead of the oceanic point in the Labrador Current where icebergs are pulled southward from Greenland, it quickly funneled ice toward Canada. The wind, combined with the natural pull of the current, had moved 455 icebergs into the shipping lanes by April 3.

The oil and gas industry, which has a number of rigs in the Grand Banks, was forced to deploy water cannons to spray the icebergs away because they were drifting onto the rigs so rapidly.

This week, experts met at the seventh Symposium on the Impacts of an Ice-Diminishing Arctic on Naval and Maritime Operations to discuss the recent developments to the International Ice Patrol. For decades, the patrol team has been working to include satellite data into their observations – which finally came to fruition this ice season.

“There are still some challenges with the technology,” said McGrath. Satellites, she noted, can only detect icebergs about 50 percent of the time when compared with aircraft. “There’s a lot more risk there.”

For now, McGrath and colleagues are only incorporating satellite imagery, paired with new iceberg detection software, for the northernmost region of their patrol area – 52 images that have led to the inclusion of 134 additional icebergs in their database. “We are not confident to use that data in the most dangerous areas of the shipping lane,” said McGrath.

However, flight hours have already been reduced to 295 hours from an average of 460, and the patrol team is positive that with refinement, satellite reconnaissance will eventually overtake some of the historic monitoring methods that have been in place since the sinking of the Titanic.