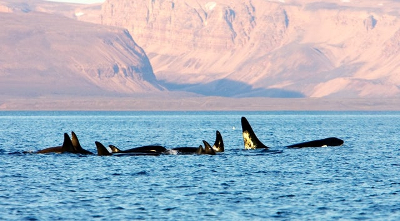 Scientists are using satellite tags, biopsy samples and a growing photo database to help get a handle on the distribution of killer whales through Canada’s northern waters.

In august 2009, a Canadian research team followed a killer whale swimming in the waters of Admiralty Inlet in the country’s Nunavut territory. Once they were about 10m (30ft) away, the researchers used a crossbow to deploy a satellite tag into its dorsal fin.

These tags, slightly smaller than a deck of cards, have two metal prongs that stick into the whale’s elastic skin and remain embedded there for anywhere from one to three months. In this case, it stayed for 90 days, until the tissue softened up and the tag fell out.

The team, comprising research scientists from the federal government’s Department of Fisheries and Oceans (DFO) as well as students from the University of Manitoba, could see that the whale, either a female or immature male, stayed in Admiralty Inlet and nearby Prince Regent Inlet from mid-August to early October, just after ice began to form in the latter in late September.

Then it swam along the east coast of Baffin Island into the North Atlantic Ocean and on to the Azores by mid-November – a distance of 5,400km (3,355 miles) in about one month. That’s when the tag fell off.

“That movement was new, just because I don’t think anywhere in the world it had ever been directly documented before that killer whales would range that far,” said Cory Matthews, one of the research scientists.

There’s much to be studied about the orcas in the North Atlantic. When they’re spotted in the eastern Arctic in the summer months, it’s not yet known where they’re coming from – a short hop up from Newfoundland, or from farther away, off the coast of Iceland or even Norway? This orca’s trip showed it was at least possible that killer whales could be coming from 5,000km (3,100 miles) away to summer in the Canadian Arctic.

As sea ice disappears, OCA’s research into the presence and distribution of killer whales in Canada’s northern waters is increasingly important. The team will be heading back to Admiralty Inlet this summer, as it has done several times since 2009, to collect more data.

“That’s certainly one of the drivers of the research – if the ice melts, there should be more access for killer whales to get up into the Arctic,” said Matthews.

This has potential ramifications for the whole ecosystem, including orcas’ prey, as an OCA study published in February shows. Scientists tracked killer whales and narwhals in Admiralty Inlet and found that the mere presence of the orcas caused a significant change in the narwhals’ behavior.

The narwhals clung to the shore, as close as 500m (1,640ft) from it, compared to the 4–10km (2.5–6 miles) they strayed when the predator wasn’t around. The behavior wasn’t prompted by the killer whales chasing or attacking, but simply by their presence in the area. That can limit the narwhals’ feeding grounds and make them more accessible to hunters on land.

“I think the narwhal are scared to death,” Steve Ferguson, another researcher on the team, told Canada’s Globe and Mail newspaper in February. “Watching your brother or sister or mother get killed and eaten by a killer whale would cause a little post-traumatic stress in most of us.”

The finding confirmed what local Inuit people had told the researchers: that the orca, an apex predator, does indeed affect the swimming behaviors of prey species like narwhals and seals – in some cases so drastically that they nearly swim right up onto the beach.

Killer whales also feed on bowhead whales, who, in the summer months, seek out sea ice. Scientists have hypothesized that this could be a strategy to evade predators. “If sea ice is lost, then they have lost that refuge,” said Matthews.

OCA is trying to figure out how much prey could disappear from the ecosystem due to killer whale predation by studying what and how much the orcas are hunting and eating when they’re in the Arctic. One piece of the puzzle is just how many killer whales are frequenting the northern waters.

It’s not yet clear how many more are summering in the Arctic than in the past. Some local Inuit have told OCA that the whales’ occurrence is a new phenomenon, while others say they’ve been around for decades. In Hudson Bay, their presence does seem to be recent, Matthews said. But some people on Baffin Island say that killer whales have been there for years.

The whales don’t stick around all year – they leave as winter approaches and the waters freeze up. Then they return, to some regions, in the summer.

An interactive map of sightings shows several in Hudson Bay, some along the coast of Quebec and Newfoundland and Labrador, and many in the waters around Baffin Island. The most northerly sighting was documented in 2012, on the east coast of Devon Island, north of Baffin. The most westerly occurred in 2009, in Tuktoyaktuk, Northwest Territories.

An 89-year-old resident told the Canadian Broadcasting Corporation it was the first time killer whales had been spotted in Tuktoyaktuk’s harbor. Matthews believes all of these orcas are coming from the North Atlantic.

Matthews and other researchers will be satellite tagging again in Admiralty Inlet this summer, but that’s not the only method they rely on. They’ll also take photographs for identification and collect biopsy samples to analyze genetics and diet.

The biopsy device is a small cylinder that’s open on one end. It gets shot from a crossbow, hits the whale, takes out a little sample of skin and blubber, then bounces off and floats on the water for researchers to collect.

“The satellite tagging is what a lot of people find really cool, but I think in the end what’s going to be the best data we have is our photo identification,” Matthews said.

Individual orcas can be identified by their dorsal fins and markings such as the saddle and eye patches, so with photos, researchers can tell whether they’re viewing the same whales they’ve seen in the past. For instance, in 2015, they spotted the same group they had tracked in 2009 in Admiralty Inlet.

The database already contains thousands of photos. OCA intends to continue taking photos every year so that it can then compare with databases from Newfoundland, Iceland and Norway to see if the same whales have been spotted in the various regions.

“It’s about trying to learn overall population structure in the North Atlantic and how all of these different populations are moving around,” Matthews said. “To understand which whales might eventually come into the Arctic.”