How Climate Change is Spurring Wildfires in Alaska and NWT 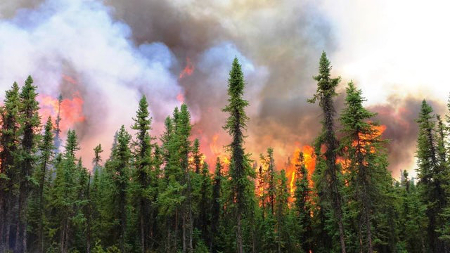 Longer hot, dry spells in the boreal forests that stretch across Alaska and the Northwest Territories create the conditions for wildfires triggered by lightning strikes.

SHORTLY AFTER MIDNIGHT on June 22, 2015, lightning struck along Alaska’s Elliott Highway, 48km (30 miles) northwest of Fairbanks, igniting black spruce forests and tinder-dry grasses. The Aggie Creek Fire, as it was later called, would go on to burn for more than two months, scorching some 12,100 hectares (30,000 acres) and threatening the state’s Alyeska oil pipeline. By the end of 2015, more than 2.06 million hectares (5.1 million acres) had burned in 770 fires across Alaska, an area roughly the size of Connecticut and second to only 2004’s record-breaking 2.67 million hectares (6.6 million acres). In 2014, Northwest Territories saw the worst fire season since 1975, when 385 fires burned 3.4 million hectares (8.4 million acres) in the Canadian territory.

The majority of fires in the North are started by lightning – not humans, as is the case in the lower 48 states. In the hot summer months, it’s not unheard of for more than 2,000 lightning strikes to hit Alaska’s lowlands in a single day. But due to a lack of reliable monitoring systems, it wasn’t clear just how large a role lightning played in the 2014 and 2015 wildfires – or how lightning will affect future fire seasons.

In a  in Nature Climate Change, researchers looked at variations from year to year and found that between 1975 and 2015, 76 percent of large wildfires and 82 percent of burned area in the Northwest Territories originated from lightning. In interior Alaska, those numbers increased to 87 percent of large fires and 95 percent of burned area. With lightning strikes predicted to increase by up to 59 percent by mid-century, these findings have significant implications for the boreal forest and tundra. If fire size remains the same, researchers project that changes in lightning ignitions will ultimately see 35 percent more area burned in the Northwest Territories and 55 percent more area burned in interior Alaska by 2050.

Fire is a natural part of boreal forest ecosystems, with forest stands burning every 60 to 100 years. But Arctic warming has disrupted the natural cycle. Over the past 50 years, Alaska has warmed by about 2C (3.6F) – twice the rate of the rest of the planet. At the same time, wildfires have become more frequent and more severe, with the fire season lengthening by about four days per decade.

According to the study, this longer fire season may increase the number of lightning ignitions by also lengthening the period of thermal convection and thunderstorm formation. Earlier snowmelt and dry vegetation, researchers posit, will then exacerbate ignition rates. “In the boreal forest, the fuel load is always there,” said Randi Jandt, fire ecologist with the Alaska Fire Science Consortium. “You only need two weeks to dry out Spanish moss and then it starts behaving like a dead fuel.”

But while the dense fuel loads of the boreal forest have long been recognized for their fire potential, lightning has largely been overlooked in past models. “Lightning as a driver of ecosystem change, and potentially a biome shift, has remained underestimated,” said Sander Veraverbeke, lead author of the study. “Till now, we did not appreciate well that lightning can bring fire to areas that did not experience fire before.”

Though a network of ground-based lightning sensor towers exist across Alaska and Canada, inconsistencies have made it difficult for researchers to rely on the data. For one thing, the towers, Veraverbeke said, are not spread out equally over the landscape, with more towers located in forested regions and none near treeline. That makes it difficult for researchers to detect changes in lightning in the transitional zone between boreal forest and tundra.

Secondly, lightning sensors have been continuously upgraded, which makes it impossible for scientists to accurately analyze trends over time. “A new and better lightning network was installed in Alaska in 2012,” noted Veraverbeke. “This is great for the current detection accuracy. However, it’s difficult to compare the new data with the pre-2012 data.”

As it stands, there are no space-based sensors that collect lightning data in the high latitudes with enough detail to enable scientists to study lighting-fire interactions. Veraverbeke said such a detector in a polar orbit would provide consistent data for not only boreal North America, but also boreal Eurasia.