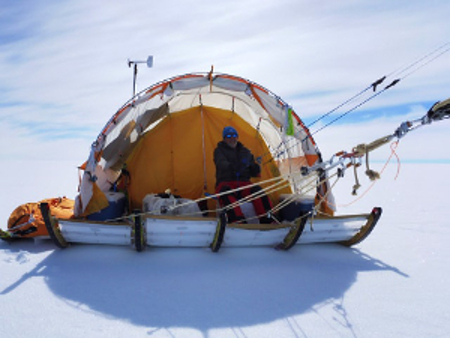 An explorer’s wind-powered sled is turning out to be a cleaner, simpler way for polar researchers to do their work studying pollutants on the Greenland ice sheet.

Ross Edwards wasn´t sure what he’d gotten himself into when he arrived in Kangerlussuaq this past May to begin a month-long traverse of the Greenland ice sheet. His four teammates were busy assembling the strange vehicle they would use to cross the barren ice – a train of wooden sleds pulled by a giant kite. But Edwards, an earth scientist at Curtin University in Perth, Australia, worried that it wasn’t up to the task. “Man, this looks like a futon,” he thought.

A few days into the trip, however, Edwards began to appreciate the WindSled as it sailed silently across the ice, propelled by wind. “It was kind of magical when it was happening,” he said. “It’s like you’re being towed along by nothing.” And indeed, the trip was a success. Late last month, the team arrived at an ice core camp in central Greenland with all the data and samples they had hoped to collect. The expedition helped convince Edwards and others that the WindSled could be a simple – and green – way for scientists to carry out critical research in Greenland and Antarctica.

The first challenge was to see if he could do it. And 17 years and 10 prototypes later, the WindSled has evolved from the far-fetched dream of an adventurer to a reliable means of polar transportation. The vehicle has traveled more than 20,115 km (12,500 miles), completing seven trips in Greenland and two in Antarctica. It has supported one previous research expedition, although nothing as ambitious as this recent venture.

The sled is made up of four modules: a sheltered wheelhouse where the driver sits to steer the kite, a tent that serves as the living quarters, and two rafts of solar panels and cargo in between. All told, it weighs just over two tons, including its crew of up to six people, who sail around the clock, resting in shifts. “It’s not the Hilton, that’s for sure,” Larramendi said, “but you can sleep.”

They carry an array of kites suited to a variety of conditions, and typically travel around 10 km per hour (six miles per hour) – that’s gentlest on the sleepers, according to Larramendi. Tacking like a sailboat, the sled can move in many directions, including up to a 90-degree angle away from the wind.

On this trip, WindSled successfully navigated to each of the spots where Edwards wanted to take shallow cores of snow. Edwards also collected surface samples to measure the amount of black carbon, or soot, in the snow, which can accelerate the ice sheet’s melting. In some cases, this black carbon has been blown thousands of miles by the wind from wildfires burning in North America. Increasingly, it comes from local sources, too, like shipping and natural gas flaring in the Arctic. The sled also towed a radar instrument that probed the ice beneath them, providing estimates of yearly snowfall, and carried an air sampler mounted on the driver’s tent.

Traverses like these offer scientists a more detailed view of how polar ice sheets work, and how they are responding to climate change. Researchers can look at many different locations on the ice sheet and see how much they change from year to year. “Especially in Greenland, with it changing so quickly now, it’s really important to actually be on the ground and make these measurements,” said Zoe Courville, a climate scientist and engineer with the United States Army Corps of Engineers Cold Regions Research and Engineering Laboratory in Hanover, New Hampshire, and a veteran of polar traverses.

One major objective is to get a better handle on how much snow accumulates in Greenland every year, balancing out what’s lost through melting and calving. That’s a critical number for understanding how quickly the ice sheet is shrinking, and in turn, how much it’s contributing to global sea-level rise. “Ideally, at some point, we could do this remotely, but there’s still a lot we are trying to figure out,” Courville said. For now, collecting radar data and drilling shallow cores along traverses remain important tools, and she sees great potential for the WindSled.

Historically, such journeys have been accomplished with treaded tractors or snowmobiles, or by hopping around in a plane. And those methods have benefits; researchers don’t have to wait for the wind to blow the right way to keep moving, and – with tractors – they have a solid shelter for riding out storms. But they also have drawbacks, Courville said. “It’s this fuel thing that really is a killer sometimes.”

Motorized expeditions are typically limited by the amount of fuel they can carry, and often require extra supplies to be cached along the route ahead of time or ferried along in extra trips. A fuel drop can cost up to $2 million, and managing spent fuel barrels presents a daily challenge for traverse crews, Courville said. Burning that fuel also creates other problems. “We’re basically polluting the areas that we are going to because it requires fossil fuels,” Courville said. Exhaust can contaminate samples of air and snow, like those Edwards collected, and leaves behind a carbon footprint that makes many climate scientists uneasy.

Although the WindSled can’t carry as much weight as motorized vehicles, it certainly offers a cheaper, cleaner alternative, which appeals to Jason Box, a climatologist at the Geological Survey of Denmark and Greenland in Copenhagen. Box first met Larramendi in 1998, when the explorer reached out, looking for data on the wind patterns over the Greenland Ice Sheet. Box later became interested in using the WindSled for science, and helped support this year’s expedition through his Dark Snow crowdfunding project.

But he hopes that will be merely a prelude to an even bigger undertaking next year: Box has applied for funding from the Leonardo DiCaprio Foundation to circumnavigate the Greenland ice sheet on the WindSled, collecting 18 ice cores and measuring them on site with a portable core processor. It would give researchers a clearer picture of the recent history of the ice sheet. Larramendi is also seeking collaborators for a 2018 circumnavigation of Antarctica.

Box, for one, is eager to take advantage of WindSled, which he sees as a harbinger of the greener future of science. “If we can surf that technological wave, it’s there,” he said. Besides, he added, “It’s going to be fun.”