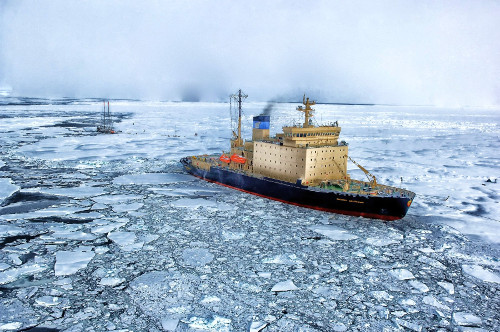 The World Wildlife Fund spent 18 months scoring how well Arctic nations are meeting their environmental goals. But as the WWF Arctic Programme’s communications chief Clive Tesar explains, the grades are just part of a bigger picture.

Has the arctic Council achieved its environment-related intentions over the past 10 years? The Arctic Council Conservation Scorecard – a new analysis by the World Wildlife Fund (known outside the U.S. and Canada as the Worldwide Fund for Nature) – paints a very mixed picture.

The alarmingly low grades on critical regional problems like preserving biodiversity and cleaning up shipping may not surprise informed Arctic observers. But the scorecard’s uniformly high marks for international “oil spill cooperation” seem at odds with the region’s widely known lack of resources for dealing with potential Arctic drilling disasters.

Like icebergs, these final grades are merely the visible parts of a bigger, more complex story, says Clive Tesar, the WWF Arctic Programme’s communications chief. The scorecard “is more quantitative rather than qualitative,” Tesar said – which is why, for instance, Finland and Norway each got a B for ecosystem-based management, better grades than any other nation received.

The high scores seem at odds with Finland’s recent logging push into ancient boreal forests, or Norway’s controversial culling of wolverines, an important apex carnivore in the Arctic.

But WWF graded the nations solely on what they agreed to in the Arctic Council, Tesar explained, such as integrating ecosystem-based management principles into their natural resource management policies. “It doesn’t say necessarily that they’ve done it well,” he said, “that they’ve really understood the implications of ecosystem-based management and rigorously applied them,” he said. “The qualitative stuff? To then say, ‘OK, but how well did you do it?’ There’s a whole other conversation.”

Compiling the scorecard – an 18-month effort – also exposed a problem with the Arctic Council’s working methods, Tesar said. Of the conservation actions that council members (eight nations and six international Indigenous peoples’ organizations) agreed to accomplish between 2006 and 2016, fewer than half came with clear next steps for action.

As an official observer to the Arctic Council, WWF is ready to work with any Arctic nation that wants to dig into the deeper story behind its scorecard grades, Tesar said, and address Arctic conservation gaps. Arctic Deeply talked to Tesar about the scorecard and its implications.

Arctic Deeply: The biodiversity grades are Cs and Ds down the line. Even the Arctic Council itself gets a D for biodiversity. What’s not happening? What are these nations not accomplishing?

Clive Tesar: In this case I wouldn’t put it down necessarily to a lack of will, just to a lack of available time to implement the will. A lot of the biodiversity-related directions that we were assessing actually came in Actions for Arctic Biodiversity [a 2013 report from the Conservation of Arctic Flora and Fauna, the biodiversity working group of the Arctic Council]. Three years is not very long in legislative time, so partly what we’re seeing here is that it’s not that states don’t want to do it and don’t intend to do it. It’s that three years just hasn’t been long enough for them to put these things in place.

Arctic Deeply: The scorecard rates all the nations, as well as the council, highly in the arena of cooperation on oil spills. What accounts for these scores?

Tesar: In some sense this is counterintuitive. On the one hand, we’re saying that the council and the states have delivered well on their commitments on cooperation on oil spills.

But on the other hand, the states aren’t really ready, for the most part, to deal with a major spill. They don’t have that capacity. They don’t have the equipment. They don’t even necessarily have the techniques to capture oil in icy conditions. So how can it be that they’re looking so good in this category?

The answer, as we went back again through what sorts of things the council is asking itself and its members to do, is that those things were important – but nowhere near what is required to address the whole problem. When we talk to the states around the scorecard we make certain to bring that up and say, “Don’t rest on your laurels of this one. You might look really good but that’s because your commitments that you made through the council were really not very ambitious, and really not sufficient to tackle the problem of how you would either cooperatively or individually tackle oil spills in Arctic waters.”

Arctic Deeply: Where is the ambition lacking?

Tesar: It’s lacking in terms of, say, being able to agree to things like a joint fund that the Arctic Council countries could pay into, that would help clean up any any spill that occurred within Arctic waters. Or to enact, on a national basis, legislation that was sufficient to really mitigate more effectively than has been done to date the risk of any spill.

In Canada there’s a requirement now to have the ability to drill a relief well within season; in some [other] countries that’s not the case. That’s what we’re looking for: those better abilities, and to multilaterally commit to everybody having the same baseline. Because it’s not necessarily great if one country has great legislation and the neighboring country doesn’t. There’s no convenient large boom in the international waters separating them. An accident in one could be an accident for their neighbor.

Arctic Deeply: So why create a scorecard based on measurable direction from the Arctic Council, if the results don’t seem to reflect the realities on the ground?

Tesar: Because the Arctic Council is an effective international governance tool in so many areas. I certainly wouldn’t want to belittle what the council does, and even less belittle what it could become and should aspire to be, in terms of being able to influence better governance, better conservation management across the Arctic.

Where the Arctic Council hasn’t been great in doing this is where it has demonstrated less ambition in formulating direction. We’re not sugarcoating it when we communicate about the scorecard. We’re saying, “It isn’t good as it looks. This means that you, as the council collectively, have to pull your socks up and get better at giving giving direction in this sector.”

Arctic Deeply: When it comes to marine shipping practices, the nation-by-nation scores resemble the biodiversity scores in being all Cs and Ds, but the Arctic Council as a whole gets an A. Why the difference?

Tesar: That’s largely due to a good base product that the Arctic Council came up with: the [2009] Arctic Marine Shipping Assessment. Part of why it’s rated highly is because it has a fairly stringent follow-up process: Every couple of years they look at, “How are we doing on following up on the recommendations that we set for ourselves collectively as the council?” They’ve created a good process, so they get a good score there.

The individual nations haven’t scored as well. They haven’t been able to come up effectively with ways to, say, look at their culturally and ecologically significant [geographic] areas well enough, and figure out what to do around shipping in those areas.

Arctic Deeply: Given how rapidly sea ice is diminishing in the shipping lanes, this would seem to be one of the really pressing areas where Arctic nations need to act.

Tesar: It is. I think the Arctic Council had, to an extent, placed a lot of hope and trust in what would happen as a result of the International Maritime Organization’s Polar Code. We and perhaps some of the Arctic nations were expecting the Polar Code to come up with more than it did. For instance, there are one one or two major issues that haven’t been dealt with, and one of those is the use of heavy fuel oil in the Arctic – except in a very small area around Svalbard, where it’s not allowed.

Anything the Arctic Council recommends in the area of shipping can really only be enacted in one of two ways. One is by some form of international agreement; just saying it at the Arctic Council doesn’t make it so. There has to be either a special binding agreement negotiated on the side, or you go to an international body that’s already doing it, in this case the IMO. Or, the nations can enact legislation nationally that just covers their own waters.