China Loops the Arctic Into Its Belt and Road Vision 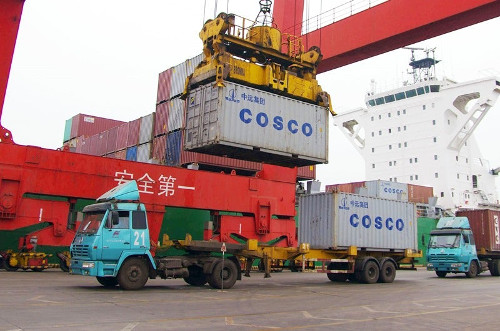 China has played down its commercial interests in the Arctic in recent years. But it’s increasingly confident in pursuing northern resource development and shipping opportunities, says Massey University’s Marc Lanteigne.

Since becoming a formal observer on the Arctic Council four years ago, China has wasted little time widening and deepening its credentials and diplomacy in the region. Just before attaining observer status within the council, government papers and studies began to habitually refer to China as a “near-Arctic state” (“jin beiji guojia”), even though that state had no actual Arctic geography. This term caused some consternation among Arctic governments and other actors who worried Beijing was seeking to gate-crash its way into the region to benefit from the growing economic possibilities in the Arctic in the form of fossil fuels, resources and potential new shipping routes.

In response, China has sought to alleviate such concerns by stressing its scientific interests in the Arctic, including the effects of Arctic climate change on China’s own weather patterns and ongoing struggles with air pollution. Case in point: a study published in March in the journal Science Advances drew specific links between Arctic ice erosion and stagnant air that is trapping air pollution on the Chinese coast during winter months.

Beijing has also been seeking to develop scientific partnerships with Arctic states in order to broaden its knowledge of the climatic and geographic changes in the Far North. In addition to such cooperation with Arctic states, Beijing has also expressed support for cooperation with its neighbors Japan and South Korea in Arctic research. During a meeting between Arctic representatives of the three governments in Tokyo this month, it was announced via a joint statement that the trio would launch a formal cooperative dialogue on Arctic research.

China has also expressed interest in joint economic development in the Arctic. It has engaged in projects ranging from joint oil and gas exploration in the North Atlantic with firms from Iceland and Norway, cooperation with Russia on the Yamal liquefied natural gas plant in Siberia, as well as potential rail and port facilities at Arkhangelsk, and investment in rare-earth elements mining at Kvanefjeld, Greenland. Chinese firms are also enthusiastic about the possibilities of increased cargo transit through the Northern Sea Route, which would allow for expedited shipping between East Asia and Europe. Nonetheless, China had traditionally played down its economic interests in the Arctic, preferring instead to let scientific endeavors take the lead as China’s Arctic interests continued to take shape.

However, that may be changing, as Beijing has become much more confident in publicly expressing its views on the economic potential of the Arctic as more of the region opens to potential resource development. This week, a new paper co-released by China’s National Development and Reform Commission and the State Oceanic Administration provided new insights into how the Arctic may be more closely tied to Beijing’s ambitious trade policies, specifically the Belt and Road (“yidai yilu”) initiative that has been taking shape since President Xi Jinping took office in 2012.

The initial structure of the Belt and Road involved creating sea corridors through the Indian and Pacific Oceans to Africa, Europe, the Middle East and South Asia, as well as land corridors connecting China with Central Asia, Eastern Europe and Russia. The Arctic did not play a role in these early maps and outlines of the Belt and Road, although Arctic economies, including the Nordic states and Russia, were viewed as potential partners as these trade routes were conceived. The new paper considerably altered that vision when it named three specific sea routes which would be essential for China to develop a “blue engine” (“lanse yinqing”) to promote greater economic growth, namely the Indian Ocean-to-Mediterranean sea route, the South Pacific and the Arctic Ocean. All three of these “blue economic passages” (“lanse jingji tongdao”) would be developed through partnerships with local governments and economies. In the Arctic, the paper outlined China’s interest in working with other actors in the region to improve sea transit conditions, survey for new resources and promote clean energy and mutual development.

This paper offered the most specific evidence that the Arctic would be viewed as a part, albeit a nascent one, of the Belt and Road Initiative. Yet, there had been signs that the Arctic was being more commonly considered in Chinese policymaking circles as a future addition to the Belt and Road trade route configurations. It was recently noted by academics in Tsinghua University in Beijing that a future title for the Belt and Road may be One Belt, One Road and One Circle (“yidai yilu yiquan”) as the Arctic Circle becomes more deeply integrated into China’s trade policies.

China’s shipping interests, especially the Beijing-based China Ocean Shipping (Group) Company (Cosco), had been expressing great enthusiasm for more regularized maritime cargo shipments via the Northern Sea Route to Russian and European ports. Arctic shipping remains very much in the beta stage, with only 19 vessels completing that run in 2016. Yet with summer ice levels continuing to decline and the possibility of the Northern Sea Route being open to ship transits for longer periods during midyear, China does not want to be left behind in any future widespread economic development in the region. While Beijing has stressed its support for laws and norms in the Arctic, as well as bilateral and multilateral cooperation, there remains the underlying perception that Beijing will not accept being marginalized in the Arctic should the region continue to open up to development.

At present, there is no specific white paper from the Chinese government on Arctic policy, but such a document is said to be in preparation; hints about its contents might be found in the government document released by Beijing on its developing policies in Antarctica during an Antarctic Treaty Consultative Meeting held in the Chinese capital last month. The paper outlines many avenues for scientific cooperation and environmental protection around the South Pole, but it also makes note of the potential for sustainable development on the continent. What can be noted at this stage is China’s growing comfort in taking a dual-track approach to its Arctic strategy, with scientific diplomacy a more frequent part of forthright discussions and statements about the economic opportunities appearing in the Arctic, as well as China’s much stronger position in which to play an important role in the region’s ongoing opening.