Tiny Aleutian Island Has Big Dreams for a Deepwater Port 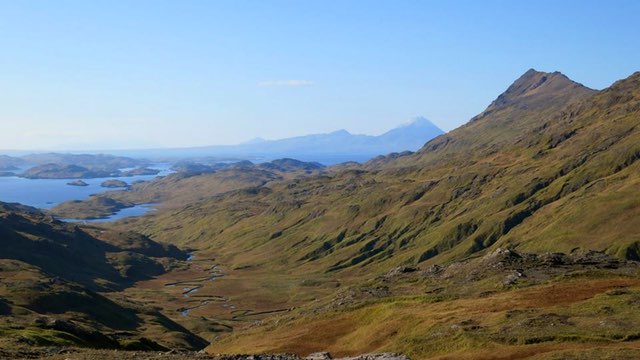 THE TINY VILLAGE of Adak at the end of Alaska’s Aleutian chain is closer to Japan than to most of the United States. The southernmost city in Alaska, it lies roughly 3,200km (2,000 miles) from the state capital, Juneau. It is the site of a former U.S. military base and residents hope that disappearing sea ice might help revive the community if shipping traffic picks up in the north Pacific.

If You Build It, They Will Come

The U.S. built a sprawling army and naval base on Adak Island during World War II. Alongside the military assets that remain are houses for up to 6,000 people, a bowling alley, swimming pool, 400-seat theater and even a disused McDonald’s restaurant. “There are so many infrastructure assets – it’s unbelievable what the Navy left out here,” said long-time resident Cynthia Galaktionoff. “There’s paved roads and garages, lights and sidewalks,” she said.

All that infrastructure, the electricity that goes with it and the deepwater that surrounds the Aleutian island are precisely why people living there believe it is an excellent candidate to become a future Arctic shipping port. To that end, the Aleut Corporation launched a website to promote the idea in 2015.

“We’re not necessarily building docks right now,” said Adak city manager Layton Lockett. “But in the next 50 years? … At this point, we are just leveraging what we have in this community.”

What they have includes miles of roads, hundreds of acres of flat land and a naturally occurring deepwater port. Lockett believes his community, and others like it in western Alaska, should have started years ago to develop a vision for how their communities might grow. “It helps diversify a city’s economy as part of an Arctic shipping strategy,” he said.

In the mid-1990s, the base on Adak was downsized and the last military personnel, from the U.S. Navy, left the island in 1997. The village is tiny – according to the 2010 U.S. census, the population is 326, but other sources, including Galaktionoff, report fewer than 100. Two jets that fly in and out each week use one of two runways that remain operational. Adak is known as “the birthplace of the winds,” and all that gusty weather has torn sides off buildings. Heavy rain, for which the Aleutian chain is also renowned, has wreaked havoc inside. Buildings are mouldy. Roads are crumbling.

Neither the city itself, nor the Aleut Corporation, the largest landowner on the island, has the revenue to maintain the base’s infrastructure. “We have lots of roads, except the paved ones don’t get fixed,” said Galaktionoff. “Unfortunately, the city doesn’t have the wherewithal.”

The neglect is so apparent that it gets a mention in the “general information” section of the city’s website. “Not all entities have resources to renovate facilities and infrastructure to look new or updated or adequately secured,” it says, alongside listings for the existing businesses.

It is easy to feel forgotten if you live in a place like Adak. “Something that would be nice, is if the state would involve communities … in their vision,” said Lockett. But these days, it’s easy to feel forgotten if you live almost anywhere in Alaska. The state legislature continues to struggle with a $3 billion budget deficit, thousands of job losses and a sputtering economy tied closely to the price of oil, which remains low.

“We don’t have the money right now,” admitted Chris Hladick, the state’s commissioner for the Department of Commerce, Community and Economic Development. Without state funding to support the construction of a deepwater shipping port anywhere in Alaska, let alone Adak, Hladick said the only way to move forward would be through a federal process involving the U.S. Army Corps of Engineers (USACE). Such a process is under way more than 800 nautical miles north, in Nome. Plus, said Hladick, there has to be demand. “What’s going to come through there?” he asked of Adak. “What’s going to come through anywhere in Alaska?” he said. “It’s not that it won’t happen, but it hasn’t happened yet,” he said.

It is unclear, however, whether Adak would even make a short list of possible candidates for a new deepwater port if its residents were not the people speaking for it. A Norwegian company recently considered the prospect. But an expanse of ocean still lies between the Aleutian Island chain and the Arctic Circle. It’s also uncertain that shipping traffic will pick up enough to justify building more deepwater ports in the Arctic. An assessment of traffic between 2011 and 2014 shows most shipping is tied to the fishing industry, and of the 11,066 ships detected in the Arctic in 2014, the majority were there for surveys and research.

While revitalization seems to be a regular discussion around the few dinner tables in the tiny town, Hladick, who spent 25 years as city manager in another Aleutian town, says it is also political. “It’s always been about competition,” he said of the communities that dot Alaska’s far-flung island chain.

The state’s Department of Transportation and Public Facilities worked with the USACE to evaluate options in 2008. That effort was postponed indefinitely after Royal Dutch Shell pulled out of a plan to conduct exploratory drilling for oil along Alaska’s west coast in 2015. On the upside, an Obama-era law in one sentence outlines that when the USACE deems an Arctic deepwater port feasible, it may provide “technical assistance to Alaska native villages, native corporations or villages.”

In the nearer term, Lockett is trying to defend the subsidized twice-a-week air service to the community, which has come under fire from the Trump administration.

In 1998, Galaktionoff’s husband landed a contracting job in Adak. He was sent to help as the Navy moved out and ownership was transferred to the Aleut Corporation. When the couple first arrived, it was for six-week stints and their children were not allowed to come along. She and other transplants to the island spent their first year writing letters and making phone calls until the Navy finally gave permission for the kids to follow. “That was a really big deal,” she said.

It was that effort that landed her a position as Adak’s first city clerk. “We made a push to establish as a city,” she recalled. “We had help from the state to write the city code. We needed tsunami and disaster plans.” Today, she runs Little Michael Lodges. Nearly 400 visitors come to stay each year, most of them caribou hunters. A few come to catch a glimpse of the edge of the world. Galaktionoff remains optimistic. She said there’s still momentum from past successes in establishing Adak as a city that could spur its revitalization as a modern-day, deepwater port.

Lockett is perhaps less idealistic. “When you look at the coast from Seattle to Baja, how many ports are there? If something were to happen to an oil tanker there, they have choices. We don’t have that,” he said. But if the conditions are right, a port in Adak might soon become a necessity. “Everybody needs something,” he said. “If this industry takes off, it’s going to be everything.”