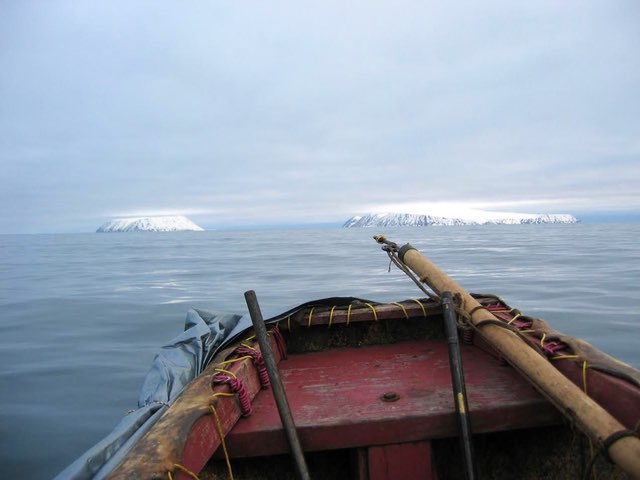 NOME, ALASKA, IS a coastal town located on the western Seward Peninsula, a short jaunt from the Russian border were it not for roughly 150 miles (240km) of ocean that divide the two. With a population of fewer than 4,000, Nome is known as the endpoint of the Iditarod Trail Sled Dog Race, when it’s known at all. Life here largely revolves around the sea. Maritime subsistence hunters patrol the surrounding icy waters for seals, walrus, whales, seabirds, fish and invertebrates. “Anything you do out here that affects marine wildlife isn’t just a conservation issue … it’s a food security and public health issue,” said Gay Sheffield, who serves as Nome’s marine advisory extension agent under the National Oceanic and Atmospheric Administration’s (NOAA) Sea Grant program.

With few federal representatives located so far north – Sheffield points to the post office, weather service, park service and one Fish and Wildlife Service law enforcement agent as her only federal peers in Nome – she acts as the key communications facilitator in the Bering Strait region. That means passing on questions, comments and observations from Alaska natives to federal agencies located elsewhere in the state and country, and participating in collaborative research projects.

More than 70 percent of Alaska’s 730,000 residents live along its coastline. Under the Alaska Sea Grant program, 12 marine advisory extension agents serve these remote communities, with further funding funneled into research projects and marine education programs on everything from the whale-watching economy to providing quality assurance for seal oil products. “Sea Grant is a mixture of problem solving around coastal community needs and building capacity in our state by supporting students and graduate students to be the scientists of the future by having them involved in real-life, current research projects,” said Paula Cullenberg, director of Alaska Sea Grant. National priorities include sustainable fisheries, healthy coastal ecosystems and resilient economies and communities.

“Our Sea Grant program doesn’t look like a program you would see in Louisiana or Southern California,” Cullenberg added. “We don’t have a lot of invasive species in this state or huge waterfront development. But we have a lot of unique problems. Alaskans are so deeply involved in the natural environment that it would be very difficult to find an Alaskan who doesn’t have some kind of wild food in their freezer or on their shelf. The connection that Alaskans have to the marine and coastal environment can’t be underestimated.”

But under the Trump administration, Sea Grant, which celebrated its 50th anniversary just last year, may not see another sunrise. On Tuesday, President Donald Trump released his first full budget for the 2018 fiscal year, following his “skinny budget” that made the rounds this March. In that budget, Trump crossed out 40 percent of Sea Grant funding for the 2017 fiscal year already underway, dooming many programs to end as early as this summer. The program was granted a temporary pardon under Congress until September 30, but it may not survive the ax a second time, with Trump planning on cutting the program entirely as of October 1.

That means scientists such as Sheffield, the Arctic’s northernmost agent, could soon be out of work.

“The Sea Grant model works really well in our state … We don’t get a huge amount of federal funds, but we are able to leverage those funds with [University of Alaska Fairbanks] dollars,” said Cullenberg. “But if we didn’t have that core funding, then I don’t think we would have a program. That’s the skeleton that you build off of.”

For Alaska Sea Grant’s 2016 fiscal year budget of $5.7 million, 36 percent of the money came from federal Sea Grant funding, with the University of Alaska providing 41 percent, or $2.3 million. Separate grants, donations and program income made up the rest. The state’s marine advisory program accounted for just over 50 percent of expenditures. The Sea Grant program costs $73 million annually to support more than 3,000 scientists and coastal research through 33 university programs nationwide.

Trump’s budget document justifies the cancellation of Sea Grant and other programs administered by NOAA by saying “these grants often are not optimally targeted, in many instances favoring certain species or geographic areas over others or distributing funds by formula rather than directing them to programs and projects with the greatest need or potential benefit. NOAA will continue to serve as a resource and provide technical assistance as appropriate on many of the issues funded by these programs.”

But to critics, including Alaska’s Republican congressional delegation, the Sea Grant cut is ill-advised. Between 2010 and 2015, Sea Grant was found to generate a $33.6 million economic impact in Alaska despite relatively modest investment.

“Sea Grant plays a vital role in Alaska and throughout our coastal communities, with the programs providing essential aspects of applied research, communication, extension and education,” Senator Lisa Murkowski said following the March budget. Congressman Don Young said, “The Sea Grant program is dear to my heart,” at a town hall meeting in Petersburg, Alaska, in April.

The possible cut also comes as sea ice is disappearing along Alaska’s coastline, opening the region up to increased shipping traffic. During this uncertain time, proponents say communication between small Alaska native communities and large government institutions is critical.

“People are going to be trying to do a lot more with less,” said Sheffield. “And the real losers are the constituents of the Bering Strait region in the Arctic. They’re trying to adapt every day to industrial and environmental changes that have not been seen here before. Everyone is utilizing the communication and information they can get, and trying to speak up about their needs. By cutting the program, you’re losing the spoke in the wheel.”