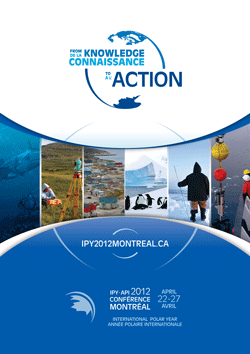 The International Polar Year - IPY 2007-2008 will be wrapped up for the final time next week 22-27 April in Montréal in the "From Knowledge to Action - IPY 2012 Conference". The conference will bring together nearly 2300 participants in 4 plenary panels, 156 parallel sessions and 12 high-level action forums on Polar research engaging Arctic and Antarctic researchers, policy- and decision-makers, and a broad range of interested parties from academia, industry, non-government, education and circumpolar communities including indigenous peoples.

International Polar Year (IPY) is an international cooperative research initiative with an objective to provide scientific information about the fundamentals of meteorology and geophysics as well as further people's knowledge on the Polar Regions.

The First International Polar Year was held between 1881-1883. Eleven nations took part in establishing fourteen principal research stations across the Polar Regions. Twelve research stations were located in the Arctic, along with at least 13 auxiliary stations, and two in the Antarctic. A vast amount of information was gathered between 1881 and 1884, but in the lack of a centralized coordination of analysis and publication of the results, no fundamental discoveries were made as a result of the first IPY. Each state published their observations independently and the International Polar Commission dissolved in the aftermath of the project.

The Second International Polar Year was both proposed and promoted by the International Meteorological Committee. The main objective of the second research initiative was to investigate the global implications of the newly discovered "Jet Stream" and to conduct magnetic, auroral and meteorological observations at a network of research stations in the Arctic and Antarctic. Some 40 countries participated in the establishment of 40 permanent observation stations in both Arctic and Antarctic. Following, the data collected during the two-year period became the foundation of the International Meteorological Organization and promoted further research, such as the International Geophysical Year (IGY), 1957-1958, often called the third International Polar Year, which celebrated the 75th and 25th anniversaries of the First and Second IPYs.

The latest International Polar Year 2007-2008, the one celebrated at the Montréal Conference, was organized through the International Council for Science (ICSU) and the World Meteorological Organization (WMO). It was gigantic international multidisciplinary collaborative with around 10 000 scientists and 50 000 other participants from over 60 countries. Main objectives of this megaproject were to significantly increase the scientific knowledge and understanding of the polar areas, especially the wide-ranging and significant impacts of climate warming in the Arctic and Antarctic, and to conduct research projects beyond the resources of individual countries.

In addition, the Polar Year 2007-2008 aimed at educating a new generation of polar scientists and engineers and raise awareness of the public and policymakers of the importance of the polar areas for the entire planet. The disciplinary breadth of the third IPY far exceeded the previous Polar Years of 1882, 1932 and the 1957 IGY providing more comprehensive picture of the polar areas.

The "IPY 2012 - From Knowldege to Action" Conference will contribute to the translation of new polar scientific findings into an evidence-based agenda for action that will influence global decisions, policies and outcomes over the coming years.

To learn more about the IPY 2007-2008, please page through the ICSU/WMO IPY Joint Committee summary "Understanding Earth's Polar Challenges: International Polar Year 2007-2008". The comprehensive, 720p. summary of IPY activities covers the development of IPY 2007–2008 for almost a decade, from 2001 till summer 2010 and demonstrates the extensive and essential contribution made by participating nations and organizations, and provides a prospective blueprint for future polar research.