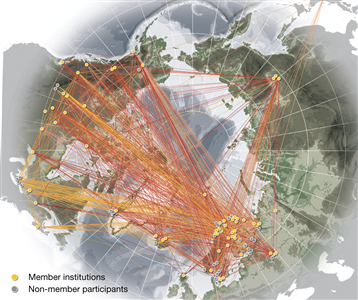 "In the North, for the North, by the North" - the motto of the University of the Arctic. It was founded in 2001 and is an international cooperative network consisting of universities, colleges and other organizations with an interest in promoting education and research in the Arctic.

The overall goal of the University of the Arctic is to create a strong, sustainable circumpolar region by empowering indigenous peoples and other northerners through education, mobility and shared knowledge.

One aspect of UArctic is it´s Thematic Networks. That increases cooperation between the member institutions on specific topics. Among the topics are Arctic Coastal and Marine Issues, Arctic Medicine, Energy in New Time, Global Change, Northern Agriculture, Northern Tourism and others.

Each network has a leader and these leaders meet regularly to discuss what they have done, what they want to do and to get ideas and thoughts from their collegues.

The last meeting was in AKureyri, Iceland, late in January of 2012. Arctic Portal was there and captured videos of the meetings. Here are interviews with various people around the meeting.

Lars Kullerud, president of UArctic, talks about the school, the thematic network and the meeting in Akureyri:
http://www.youtube.com/watch?v=ouylRLLW_E0

Peter Weiss, Director of the University Center of the Westfjords, talks about the Arctic Coastal and Marine Themtic Network.
http://www.youtube.com/watch?v=2ieCJU4Ro88