Finland’s strategy for the Arctic region 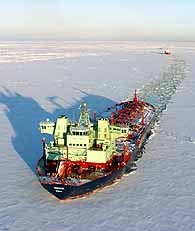 Over the past decade or so the world has become to realise the great importance of the Arctic region to the global ecology.

New geopolitical situation that emerged after the end of the cold war enabled new scientific reaserach and gradually the economical potential of the region came apparent. This notable change in how the Arctic is perceived has led to a series of new policy statements. Norway was the first Arctic country to establish an Arctic Policy in 2006 under the name "Norwegian High North strategy" and today, seven out of the eight Arctic Countries have an Arctic policy in addition to the EU Commission communication on European Union and the Arctic region.

Finland was seventh Arctic country to draft an Arctic Policy. The Strategy was released June 4, 2010 and concentrates on seven priority sectors: security, environment, economy, infrastructure, indigenous peoples, institutions and the European Union. The strategy is not a final measure but rather a starting point in shaping Finland's Arctic policy and will contribute to EU's Arctic Policy, which is currently a work in progress.

The strategy identifies as biggest security threats increasing seafaring and exploitation of the natural resources. Though there is no race to the natural resources in sight, activities in the region should continue to be based on the rule of international law and in order to protect the Arctic environment best practices and sustainable development should be pursued in activities throughout the region. The strategy recognizes that infrastructure is still lacking both onshore and offshore and needs to be improved in collaboration with neighbouring countries. What comes to the economical potential of the region has Finland Arctic expertise in various sectors, especially in marine technology and logistics, which can be utilized in the large projects particularly in the Barents Region, but also in crosspolar transportation.

According to the strategy will Finnish Sami continue to enjoy their rights as indigenous peoples and Finland will continue the work towards a national solution which will meet the minimum requirements of the ILO Convention on Indigenous and Tribal Peoples no.169.

In the institutional level Finland emphasizes the importance of the Arctic Council as a forum for discussion and decision making. Finland lays down proposals for strengthening the Council so that the Council will be better prepared to act upon the contemporary situation. These proposals include revision of the mandate and working methods of the Council, better burden-sharing and a joint budget, establishment of a permanent secretariat, expansion of the normative role of the Council, enhanced interaction with non-Arctic actors and creation of a Communications and Outreach Strategy for the Council. In addition, Finland offers to host an Arctic Summit, a conference at the highest level, under the auspices of the Arctic Council to discuss and respond to the environmental concerns rising from the natural resource exploitation, to discuss the legitimacy of different actors in the Arctic and to the future development of the Arctic Council.

But since Finland is an EU member state, as are Sweden and Denmark also, the EU Arctic Policy will play as well important role in Finnish Arctic strategy. The Strategy outlines that EU should consider the special features of the Arctic Region in the Union's various policy sectors and increase its input in the area.
Finland supports an establishment of EU Arctic Information Centre at the Arctic Centre of the University of Lapland and concurs the EU admittance as an permanent observer member of the Arctic Council.