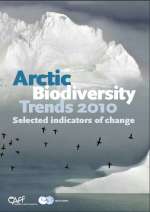 In 2008, the United Nations Environment Program passed a resolution expressing 'extreme concern' over the impacts of climate change on Arctic indigenous peoples, other communities, and biodiversity. It highlighted the potentially significant consequences of changes in the Arctic. The Arctic Biodiversity Trends – 2010: Selected Indicators of Change report indicates that some of those anticipated impacts on Arctic biodiversity are already occurring.

The report is based on twenty-two indicators and provides a snapshot of the trends being observed in Arctic biodiversity today. The polar bear is one of the most well-known species impacted by changes in the Arctic, but it is not the only one. The indicators show that the Arctic has changed dramatically during recent decades and that unique Arctic habitats for flora and fauna are disappearing. Furthermore, some species of importance to Arctic people or species of global attention are declining.