During the UNFCCC COP15 conference 2009 The Arctic Portal covered the event by gathering interesting material and publishing it on it's site. A compilation of this material can be found here bellow.

The 15th Conference of the Parties to the UNFCCC (COP 15) and the 5th Meeting of the Parties to the Kyoto Protocol will be held in December 7-18 2009, in Copenhagen, Denmark. The COP15 is of special significance because of the goals set forth in the Bali Road Map, where it was stated that in Copenhagen, a post-Kyoto Protocol action is to be negotiated.

Here you can follow the COP15 Conference, read the latest news and get information on the most current issues concerning climate change. Climate Change has be identified as one of the key issues of the Polar regions and the outcome of COP 15 therefor highly important.

For those interested in the presentation of the Greenland Ice Sheet- and Melting Ice-reports at COP15, there was an entire side event was webcasted by the UNFCCC. It has now been published on the UNFCCC website and can be viewed by following clicking the Icon Below 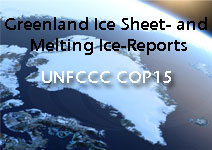 COP15 president Connie Hedegaard resigned this morning. Danish Prime Minister Lars Lokke Rasmussen will replace her as head of the Conference. Hedegaard has maintained herself that nothing dramatic is behind her resignation and that she will continue her work as a negotiator in the COP15 as a special representative of Mr. Lokke Rasmussen. Over 100 heads of States will arrive to Copenhagen for the last three days of negotiations and it is only natural that the Danish Prime Minister takes over the presidency of the Conference at this point, she said.

As the stakes are getting higher only three days being left of the Conference, the political pressure is increasing. Developing countries are not satisfied with the draft layed down by the inductrialized countries and it seems increasingly difficult to get industrialized countries to agree upon Kyoto-like procedure, where developed countries bear the main responsibility of the emission reduction.

China, India and other developing nations boycotted Climate talks today, as a protest and to demand that rich countries discuss a far more extensive cut in their emissions. This is believed to include 135 nations, which will refuse to participate in any formal working groups until the issue was resolved. This has to bee seen as a setback for the talks, and illustrates the long-term dispute between rich and poor nations over emissions cuts and financing cuts to deal with climate change. This has however not been interperated as the talks are falling apart al together but rather as a ploy intended to move the agenda to the responsibilities of the industrial countries before the arrival of over 100 world leaders are scheduled to arrive in Copenhagen.

More than 200 Protestors were arrested in Copenhagen on Sunday. Approximately 1000 protesters from across Europe were present, the crowd started targeting the Danish shipping giant Moller-Maersk which is when the Police decided to intervene. When some of the activists refused to cooperate an intire group of 200 people were arrested including a times reporter. The protesters were moved to a warehouse in Valby which has been set up with contemporary holding cells. A police spokeswoman confirmed around 200 arrest and pointed out that it was an illegal demonstrations and that some of the activists brought gas masks and things to throw. Yesterday 968 protesters where arrested during a mass march on the summit venue yesterday afternoon, out of these 968 all but 13 have been released.

So far the major issues around the Copenhagen COP15 have concentrated on the participation of world leaders to one of the biggest gathering in the field of environmental law and politics. The aim is to reach an agreement on post-Kyoto CO2 emission reduction. Many leading scientists maintain that the world's CO2 rate has reached dangerous levels and that if nothing is done to reduce the emissions the world will face unprecedented consequences. Legally binding agreement for the world's leading polluters is inevitably necessary, but it is debatable whether the political will of states is enough to create any change.

In addition to the politicians, Copenhagen has attracted a vast amount of representatives from different fields of civil society. In recent years, many global movements have been created around the action against climate change and many of them have now gathered to Copenhagen. On wednesday a small group of activists from 350 movement demonstrated outside the conference hall demanding fair and legally binding climate deal. Further, members from other global movements, such as Tck and many others are gathering to People's Climate Summit, an NGO Summit, to draft what they call "A People's Declaration".

Despite the huge pressure to seal the deal in Copenhagen, some doubts have been expressed on whether the solutions that are on the table are the best ones and whether they actually solve any of the problems. Just last week one of the leading climate change scientists James Hansen from Nasa’s Goddard Insitute, expressed his doubts on the existing emission trade system comparing it to selling indulgences. He claimed that under the Kyoto mechanisms rich countries buy cheap emission credits from developing countries contributing that way to the existing economic unbalance in the world and some of the worst poverty scenarios. Further, it has been maintained that the Kyoto mechanisms do not actually address the real problem, the CO2 emission, but are one more scam for large corporations to gain money.

Here below you can watch Annie Leonard's provocative and eye-opening short film on cap and trade, the main mechanism in use to combat CO2 pollution.

Guardian / cop15.dk - There seems to be a great change coming in the climate change negotiations, after the "Danish" draft of an agreement was leaked to media yesterday. The developing countires accuse the draft of being a legalisation of the developing / industrialised division in the world and contributing to the already existing problems in the developing countries. The UNFCCC head Yvo de Boer on the other hand said that only an informal paper is in question and that formal proposals will be only provided by the Chairs of the Conference.

It will be though interesting to see if the text of the "draft" gives any hint of what can be expexted on behalf of the industrialised countires and whether the so much talked about political will is actually only a wishful thinking. What is sure is that the negotiations are of crucial importance for the global community and a just and equal agreement should be reached for the benefit of us all.

Now when almost all the major players have announced their emission reduction targets, the talk has turned to money and the ways the battle against climate change can be financed. The US has proposed that a new climate fund should be established under the World Bank, which would direct funding to climate projects in developing countries. Further, the Asian Development Bank intends to direct 700 million dollars to two new investment funds that will primarily concentrate on financing climate change projects in developing countries. In short term, it has been estimated, that some 10 billion dollars are needed to cover the costs of the most current developments. In long term, some 100 billion dollars a year might be needed to cover the costs of climate change adaptation.

Arctic Council - During the COP15, December 7- December 18, an Arctic Venue will be held at The North Atlantic Quay in Copenhagen. In the Venue, Arctic cooperation and the latest Arctic research will be introduced as well as the Arctic reality as it appears today to the Arctic residents presented in various exhibitions, booths, posters, lectures and debates. The Quay itself will be wrapped up as an iceberg, an installation designed by Greenlandic artist Inuk Silis Høegh.The Venue is open daily during the COP15 between 12.00-18.00.

The Times - As aspired as a new global climate change agreement in Copenhagen is, it has begun to seem that an agreement with almost any content is enough. One of the world's leading climate change scientists, James Hansen from Nasa’s Goddard Insitute, has expressed his doubts on the existing emission trade system comparing it to selling indulgences. Rich countries buy emission credits from developing countries with relatively small amounts and contribute that way to the existing economic inbalance between industrialised and developing countries. The system in itself is not designed to reduce emissions, but rather to create an image of reduction and equality, though failing in both. Very few open discussions have taken place on what exactly should be the content of the new agreement and little or none public evaluation on the success or failure of the Kyoto protocol has taken place.

Recently, the UN carbon trade management body suspended Chinese wind power farm plans due to the lack of "additionality", a condition that is required for any project to qualify as a "Clean Development Mechanism". It is suspected that China has used the CDM system to finance projects that would have in any case been constructed, thus not adding any clean energy mechanisms through the investment into already planed energy scheme.

It is clear that before further steps are taken in global climate change discourse, the mechanisms existing today must be evaluated and new and better solutions developed to enable a real battle against the world wide problem of global warming.

Already 65 world leaders have confirmed their attendance to the COP15 in Copenhagen in two weeks. What is, however, still unclear is whether the heads of states of the world's top three carbon polluters - USA, China and India - will attend. The Arctic countries are well represented in the climate change conference, since in addition of being hosted by Denmark, the conference will attract JIm Prentice, the Minister of the Environment and Michael Martin, Chief Negotiator and Ambassador for Cliamte Change from Canada and Jóhanna Sigurðardóttir, Prime Minister and Svandís Svavarsdóttir, the Miniter of the Environment from Iceland. In addittion, Finland will send both the Prime Minister Matti Vanhanen and the President Tarja Halonen in association with Paula Lehtomaki, the Minister of the Environment and Jan Vapaavuori, the Minister for Housing and Nordic Cooperation.

Sweden and Norway are yet to announce their delegation, but they are as well expected to send a high-profle delegation.