The Anual meeting of the North Atlantic Coast Guard Forum is being held in Akureyri Iceland between 29.september- 2. October. At the same time and location a extensive exercise which simulates a cruise liner that runs ashore.

The North Atlantic Coast Guard Forum is a cooperation initiated by Iceland, Denmark, Finland, Norway and Sweden. Approximately 80 persons will attend the meeting. Members to the cooperation are now Russia, United States, Canada and 17 European countries. The main themes of the organizations are categorized into seven categorize which are Safety issues at sea, narcotics trafficking, illegal immigrants, monitoring fishing, search and rescue and cooperation on technology. This year’s chairmanship is in the hands of Iceland’s coastguard director Georgs Kr. Lárusson. The emphasis over the last couple of years been that increased cooperation is of high importance so response to emergencies can be swift and coordinated. 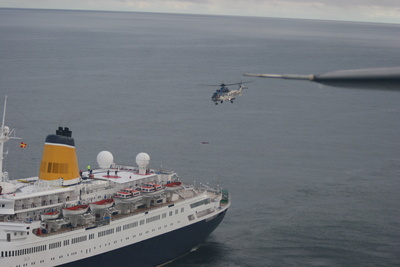 An extensive exercise was conducted in conjunction with the meeting that simulates a large cruise liner that runs ashore. This scenario is very relevant to the current state of affairs in the North Atlantic, Arctic Ocean and in actually Antarctica as cruise ships are rapidly reaching further into the North as sea ice declines. There have been considerable concerns that if anything would happen to these ships, engine break down or a breach in the hull due to sea ice could have drastic consequences. The rescue capacities needed to deal with a large cruise liner with 2-3000 people are immense and depending of the exact location of the incident the resources in form of rescue vessels, airplanes and helicopters possible nowhere near being enough.

In 2008 it is estimated that 70 cruise liners traveled to Greenland with over 150.000 passengers. None of these vessels are ice strengthened and despite a decline in sea ice there is still plenty of it and does pose a threat. Furthermore concerns have been voiced that standard lifeboats found on all cruse liners may not be able to sustain life for long enough in Ice filed waters. There have been hopes that the IMO will address some of these issues in a polar shipping code. 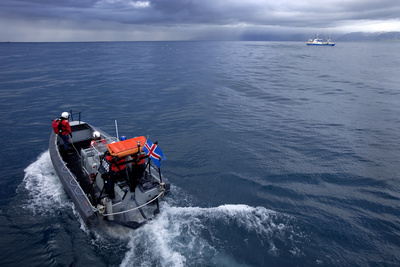 The exercise in Akureyri Iceland is very welcome and focuses on both the rescue and evacuation of people as well as pollution prevention. Participants include a Norwegian coast guard ship, Danish coast guard ship equipped with a helicopter, Icelandic Coastguard ship, airplane and a helicopter. Furthermore 3 local rescue ships and local rescue and environmental personnel are involved.