To Whale or not to Whale 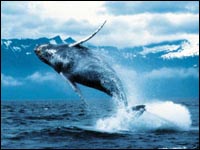 The issue of whaling is a complex matter that stands close to the hearts of many Arctic peoples and the world in whole. Public opinion varies significantly, whether whaling is cruel and barbarous or if they should be hunted and utilized in a sustainable manner, like other animals. Similar differences in views are prominent in the international community, which is locked in a bind on the matter. With the recently concluded 61st annual meeting of the international whaling commission (IWC) in Madeira, Portugal a solution seems to be no where in sight. Due to this a brief overview of the current situation as well as the history of whaling is in order.

Brief Overview History of Whaling and the IWC: 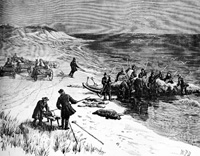 Humans have been engaged in whaling since prehistoric times and to many costal cultures they have been a valuable source of nutrition, light and construction material. Cave drawings and ancient tools from whale bones have been found around the globe dating back thousands of years. It was not until commercial whaling begun that the stocks started to decline to the catastrophic state, which many whale stocks are today. Commercial whaling can said to have started around the late 16th century, first the Dutch, then the British, Americans and later on the Norwegians. Other nations followed suit later on and whale oil became the first of any animal or mineral oil to become commercially viable. Prior to the arrival of floating factory-ships western civilizations utilized only the blubber and the baleen of the whale and the rest was discarded. The arrival of new hunting methods and increased interest in the lucrative trade caused almost all whale stocks to decline to a fraction of their earlier state. This led to a collapse of the whaling industry and spurred international cooperation to manage the whale stocks.

The International Whaling Commission (IWC) was founded in 1946 to provide for the proper conservation of whale stocks and thus make possible the orderly development of the whaling industry.

The IWC has since the late 1970s been dominated by countries largely opposed to commercial whaling. Since 1986 there has been a moratorium on whaling, functioning as an all out ban on commercial whaling with an exemption of indigenous subsistence whaling and whaling for scientific purposes. This decision was not based on advice from the Scientific Committee ( an advisory committee within the IWC) and has been disputed by pro whaling nations ever since.

The IWC is based on voluntary participation and is not backed up by a treaty between its members and has substantial practical limitations on its authority. For instance, by formally objecting the moratorium the nations can exempt themselves from the ban. Therefore, Norway, Japan, Peru and the Soviet Union formally objected the moratorium when it was issued. Peru and Japan also objected, but later on subtracted their objection, Japan after the U.S threatened to reduce their fishing quota within U.S waters. Iceland did not object the moratorium in the beginning, but withdrew from the IWC in 1992 due to disputes concerning the moratorium. Iceland was allowed to rejoin IWC in 2002 with a reservation to the moratorium, though the reservation has not been recognized by many of the IWC nations.

In the recent years, whaling has been conducted by three nations; Norway, Iceland and Japan. This whaling has not been considered to be in violation of the IWC on the grounds of their objection to the moratorium and also since it has been done in the name of research. These actions have however spurred the anger of both anti whaling nations and environmental organizations around the world. Pro whaling nations have in return accused the IWC on basing their decisions on “political and emotional” factors instead of scientific knowledge as it’s Scientific Committee has concluded since 1991 that quotas on some species of whale would be sustainable.

Whaling today and the row within the IWC

Under the chairmanship of William Hogarth, compromise talks began formally a year ago but have yielded little results so far, as nations have taken a strong stances and have not been willing to budge an inch making negotiations futile.

The recently concluded 61st annual meeting of the International Whaling Commission (IWC) in Madeira, Portugal can be said to be yet another failure to reach an agreement that is acceptable to both fractions. The debate is heated by emotion and different views seem often so far apart that it seems that a consensus will never be reached. The failure to reach common ground has endangered the future of the International Whaling Commission (IWC) as it has not been able to function properly due to skirmishes within the commission.

In an effort to mitigate differences and reach a conclusion, a number of key nations were invited to participate in a Committee to try to reach an agreement about the future of whaling and the IWC before the next annual meeting in 2010. The two most prominent matters put forward at the meeting was Greenland’s wish to include humpback whales in their annual quota. Their request has been denied two years in a row and decision on the matter was postponed at this years meeting, despite the quota being deemed sustainable by the Scientific Committee. Negotiations with Japan to reduce its Antarctic hunt, in return for the right to catch whales quasi-commercially in its costal waters have similarly run ashore and been postponed. Australia, which has taken the strongest stance against whaling recently threatened Japan legal actions if diplomatic efforts fail to halt its whale hunt.

As the situation appears today, there seems to be only one solution to save the IWC as a venue for managing and protecting the worlds whale stocks, and that is to hand out a sustainable quota to whaling nations. Such an activity would ensure their continued participation and keep the control over quotas within the IWC  This, however, will probably be problematic, as the dispute seems to have elevated, long ago, from being about sustainable catches to being a moral question. The question would therefore be if a whale’s existence has more value in itself than the existence of other animals utilized by man?