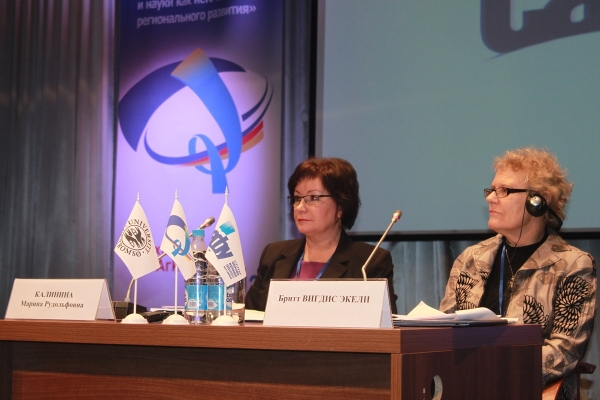 Leading researches and experts, politicians, representatives from business and authorities are attending the conference "Cooperation in the Barents Euro-Arctic Region in the field of education and research as a resource for regional development" which began yesterday.

The conference is held in the Northern (Arctic) Federal University (NArFU). In a welcoming address Britt Vigdis Ekelu, vice President of Education in the University of Tromsø said that it was "very interesting for us to discuss our common past.

The first plenary session was held later with the framework of the conference. Sverre Stub, Ambassador, Ministry of Foreign Affairs of Norway spoke about "Norway's views on the Barents cooperation". Andrej Shalev, Honorary Council of Norway in Archangelsk reviewed the last twenty years of Barents Cooperation.

"Cooperation gave us an opportunity to normalize relationships between the countries in a small amount of time," Sverre Stub said. "And the most important thing is that this cooperation has been gradually developing and involved more and more people. Contacts between people became the main basis of Barents region cooperation and turned to be the greatest achievement."

Later a panel discussion was held on the theme "Northern Universities for the development of the region: new realities – new perspectives". A dialogue between the university community and politicians". The discussion focused on the issues of Barents region cooperation, new challenges of education and research in the North, the role of universities in the development of international relationships. Special attention was paid to the problems of Barents region, such as population outflow.

The first day of the conference be considered as having been a successful event not only because of the quality of the lectures and but also because of its international character. The participants praised a constructive and motivating atmosphere during the sessions and informal talks, according to the Narfu website.