Chinese Icebreaker to reach Iceland over the Arctic 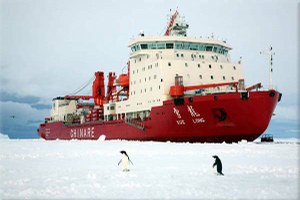 The Chinese government plan to send an icebreaker over the Arctic to ship in Iceland this summer. The ship will sail the North -East Passage to Iceland and the North-West Passage back. This would be the first time a ship would go through the Arctic from the Pacific Ocean to Iceland and back again in one summer.

China's "Snow Dragon" (Xue Long) is the largest non-nuclear icebreaker in the world. The Ice breaker will sail from the Sea of Japan and the Pacific Ocean, through the Bering Strait. The route through the Arctic will be the North-East passage, along the coast of Russia and Norway, before reaching Iceland.

The Ice Breaker will sail back through the Arctic after a quick stop in Iceland. On the way back, the vessel will sail through the North-West Passage, along the coast of the Canadian Arctic archipelago and the Alaskan Arctic shore.

The Chinese expedition could therefore be historical, since no one have sailed through both of the Arctic Passages and reaching the two large oceans, the Pacific and the Atlantic, in the same summer.