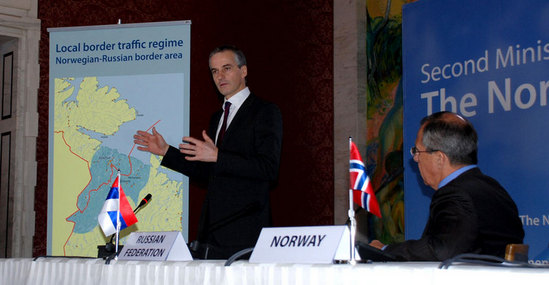 Barents Observer - Norway and Russia signed yesterday a milestone agreement on visa-free travel between Russia and a Schengen-member state in Oslo.

The agreement between Norway and Russia on Facilitation of Mutual Travel for Border Residents establishes an Arctic cross-border zone, including the Norwegian town of Kirkenes and the two Russian towns of Nikel and Zapolyarny on the Kola Peninsula, from where the population can cross the border without valid visa by showing only a specific ID-card. The ID-card is intended for locals who have been living in the zone for more than 3 years and have either Russian or Schengen member state citizenship. The new visa-free zone will facilitate the 20 percent increase in traffic crossing the Russian-Norwegian border in the first six months of 2010 compared with the same period last year and is in line with wider European policy of increased cross-border cooperation along the eastern rim of the European Union.

European Border Dialogues conference, attended by 16 states, reseantly issued a Declaration on Cross-Border Cooperation in a Wider Europe identifying key challenges in current cross-border cooperation in Europe, among which are visa regulations and border crossing procedures. The new Norwegian-Russian agreement is thus a step towards abolishing the visa-regime which discourages cooperation between Europe and Russia and enhancing regional cooperation in the Barents region.