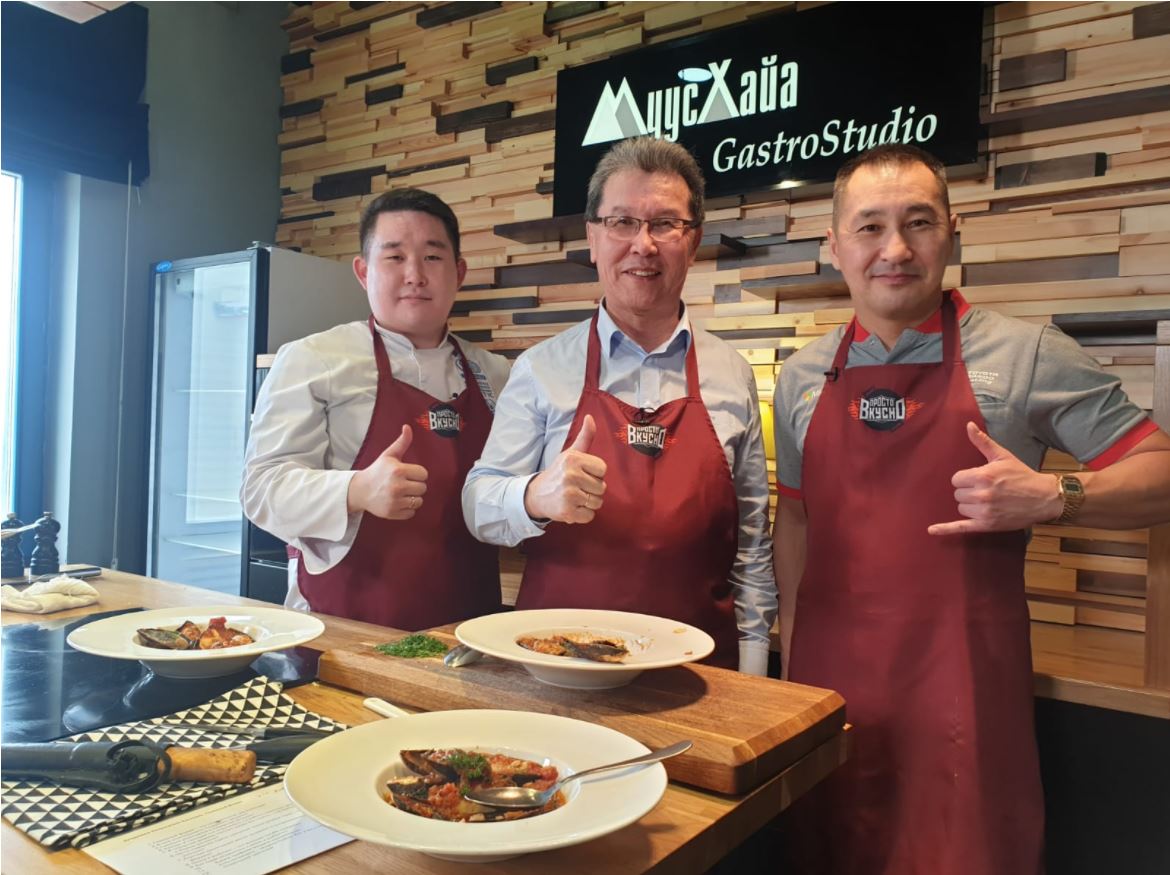 The NF Executive Director Vladimir Vasilev was invited to take part in the Yakutian TV show.

‘Prosto vkusno’ (‘Just delicious’) TV show appeared in the Sakha National Broadcast Company’s schedule a couple of years ago, with Petr Tsypandin, a famous entrepreneur and investor, as its host and Dmitry Argunov as a producer. The original idea of the show was to invite hunting and fishing enthusiasts to share their personal experiences and interesting stories and to answer the questions of concern from the republic’s residents while cooking the game.

The show guests were mostly men because hunting and fishing in Yakutia are mostly popular among them. Later, the concept of the show was changed and the guests could choose to cook any dish from any product, but the show’s man style remained.

This time the NF Executive Director Vladimir Vasilev was invited to take part in the show. Before the shooting, he suggested to reconsider the concept of the show, because not everybody can cook fancy dishes and most people just cook some ordinary meals, so he suggested to focus on the main purpose of the show – a conversation with the guest. The suggestion of teaching the guest to cook was supported by the host and the crew, as well as by Semen Tarbakhov, the host assistant and grandson of the world-famous chef Innokentiy Tarbakhov; he proposed to cook the Italian dish ‘Mussels in tomato sauce with white wine’.

Chop the onion and garlic finely. Grill the whole onion and half of the minced garlic in olive oil in a medium-sized pan over low heat. When they get slightly browned, add ¾ glass of wine, thyme and put all the mussels. Mash the tomatoes with a hand blender at a low speed. Add the mixture to the dish, stir thoroughly, add salt and pepper, the rest of the garlic. Cover the pan with a lid and let it simmer for about 10 minutes. Lay out the cooked dish and squeeze lemon juice. It's ready! This amount of ingredients is enough for 3 people.

In his conversation with the host, Vladimir Vasilev covered in detail the Northern Forum activities and the peculiarities of international cooperation in the current time. They also talked about tourism development in the northern and Arctic regions, including the general trends (cold, polar lights, culinary, traditional sectors of the economy, folk arts, birdwatching, natural landmarks, scientific and educational tourism) that might attract tourists from all over the world. No doubt, it is necessary to invest in infrastructure and training of specialists.

Despite the complex geopolitical situation in the world, the Northern Forum continues its work trying to maintain the sources of public diplomacy for the communication of all partners separated by force majeure circumstances and promoting humanitarian (cultural, scientific, educational etc.) projects. We find participation in such shows very useful. The northerners of any country share a common mentality of wishing to learn something new, help and support each other, as we live in vast expanses with extremely harsh conditions and we can’t survive without supporting each other. Despite any conflicts, we must keep trying to remain calm and patient, and to help our neighbors by transmitting the resilience and creative energy of the Arctic and the North to all the inhabitants of the planet.