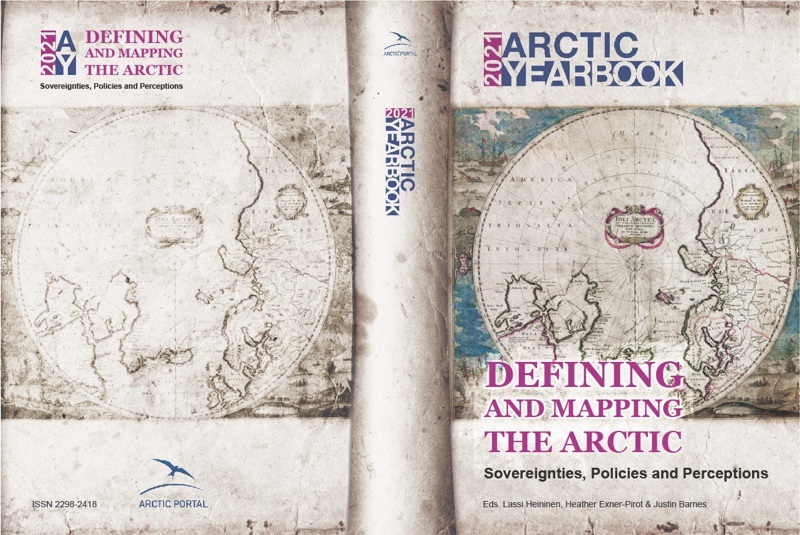 The Arctic Yearbook 2021,  is now available on the Arctic Portal or at www.arcticyearbook.com.

The publication of the Arctic Yearbook is lead by the excellent team of editors,  Lassi Heininen, Justin Barnes & Heather Exner-Pirot, with the support of the AY editorial board, technically and graphically supported and hosted by the ArcticPortal.org with exceptional contribution from its qualified team members Aevar and Fanney - https://arcticyearbook.com/about.

The Arctic Yearbook is an international and peer reviewed volume and an online publication that is open access, focusing on issues of local, regional governance and development, environmental politics, globalism, as well as circumpolar relations, Arctic geopolitics and security all broadly defined. The 2021 volume is the 10th anniversary edition of the Yearbook.

The theme of 2021, Defining and Mapping the Arctic: Sovereignties, Policies and Perceptions contains relevant topics that are much discussed, examined, reported and speculated in policy circles, academia, and the media. Perhaps because it is distant from major political, business and media centres, the Arctic seems especially prone to external interpretations of its essential character. How the Arctic is defined and perceived, or redefined, as well as how non Arctic actors remap their geographical position and (re)identify their relationship with the Arctic region, as the 2020 IIASA analysis on Arctic policies reveals. Yet dominant narratives about the region are often based on superficial, ideological or arbitrary understandings. There is a need for better informed discussions about the essential nature of the Arctic, and its people, its economy, its geography and its environment, as well as the examination of dominant perceptions.

This 10th edition of the Arctic Yearbook has provided such a space for this endeavour. This volume contains 33 scholarly articles that explore, analyze, critique, and further discuss how the globalized Arctic is (re)defined and (re)mapped. The diverse collection of articles in this volume engage with a variety of unique but also overlapping topics that include 'traditional' Arctic security and sovereignty issues; geographical factors that are influencing regional geopolitics; Russian development interests and activities; economic considerations related to Arctic geography; and the diverse roles of identity, art, and culture in articulating alternative notions of sovereignty in the region.

In the “Arctic Security and Sovereignty” section, the authors explore current understandings of Arctic sovereignty, including what it means in practice, who exercises it and how, and whether traditional, state centred conceptions of sovereignty can or should change. From how UNCLOS is being exercised to delineate boundaries among states, to how Indigenous and decolonial interpretations of sovereignty are highlighting challenges related to state centric governance structures, the articles in this section highlight the tensions that exist within how traditional sovereignty is practiced in the Arctic along with how these state centric practices have implications for Indigenous self determination.

The “Geopolitics on the Map” section explores the geographical, environmental and climatic, social, economic, political and geopolitical differences in the Arctic along political and physical lines, including to what extent there are common geographic realities that makes collaboration logical or beneficial. These considerations are examined from the perspectives of Arctic sub state and non Arctic state perspectives, including how the Faroe Islands, Turkey, and China view their involvement in the region in relation to their geographical and historical ties to the Arctic.

“Mapping Russian Arctic Development” examines definitions and delineations of the Arctic Zone of the Russian Federation from domestic and international perspectives, including the nature of shipping passages, claims to the extended continental shelf, state borders, transportation routes and systems, and Russia's growing collaboration with China to meet shared economic goals.

“The Economics of Geography” further explores the environmental and physical definitions of the Arctic in relation to economic realities and desires in the region. From tourism, fisheries, and higher education, to building a “high performing IT innovation ecosystem” in the Republic of Sakha (Yakutia Far East Russia), these articles explore the changing realities of doing business in the Arctic as wel l as the growing involvement of Indigenous perspectives in the Arctic economy.

“Identity & Geography” highlights the ways in which these two factors influence how “place” is articulated in various contexts across the Arctic. Authors in this section discuss ways in which colonialism, nationalism, Indigeneity, urbanization, and education have shaped perceptions of the Arctic, and importantly, experiences within the Arctic. As these authors note in different ways, how the Arctic is perceived, experienced, and discussed has implications for how emerging and historical issues in the Arctic are addressed, as well as what kind of expectations and goals exist for policy action.

“Art & Culture in Identity” articulate emerging perspectives regarding local, traditional and Indigenous sovereignty that explore self determination and self government, the implications of post colonial interpretations of Indigeneity, and how education, music, poetry, and art are solidifying notions of “cultural sovereignty.” Another finding of the 2020 analysis is that Arctic Indigenous peoples lean on international agreements concerning their Indigenous rights, such as UNDRIP, and are actively connecting those rights to manage their own territories and waters, as well as how to use and develop their resources. This interpretation of sovereignty differs from that of states.

Authors in this volume discuss these interpretations of Indigenous sovereignty in the context of international law, but also how the sovereignty of states cannot necessarily account for the multiple identities, affiliations, and cultural connections across borders and within domestic governance structures. Instead, articles in this section demonstrate how cultural traditions and practices are promoting forms of Indigenous sovereignty that can operate independently both within and across state structures. Special guest editor Robert Wheelersburg provides a focused introduction for this section, highlighting the tensions which exist in historical and modern misrepresentations of Indigenous peoples in the Arctic, noting the importance of understanding the diversity which exists across the entire Circumpolar Arctic.

The Arctic Yearbook over 10 years

The Arctic Yearbook has consistently provided high quality, peer reviewed articles from diverse researchers of Arctic social sciences and the humanities. Plenty of our readers early career scientists, senior researchers, students, policy makers appreciate the rich variety of themes of the Yearbook, and its style, nature, fast double blind peer review process, as well as visibility on social media. Here, the Arctic Yearbook has the capacity, expertise and structure of network, as well as the immaterial capital i.e. a digital online library of rich collection of almost 230 scholarly articles and more than 130 briefing notes and commentaries across ten volumes (since 2012) that have had a diversity of relevant themes (from human capital and innovations to governance, geopolitics and climate change) with open access. This makes the Yearbook a leading international Arctic peer reviewed journal in a few fields, such as IR, Arctic shipping, state policies, Arctic Council. Due to the openness, these articles share Arctic social science research far beyond the halls of academia, receiving tens of thousands of reads. An active social media presence more than 4000 followers has allowed the Yearbook to further disseminate Arctic research to new audiences.

The Yearbook’s application is built on several strengths as prerequisites for success a kind of philosophy based on expertise, networking based on individuals, willingness and capabilities, and encouragement. As well as, published by UArctic TN on Geopolitics and Security it has run on volunteer efforts since its initiation, and big thanks to Arctic Portal’s invaluable role in hosting the website. All this has allowed the Yearbook to remain independent, quick and flexible, and focused on publishing new research findings rather than being occupied with seeking funding.

All in all, as an international, interdisciplinary, peer reviewed online journal with open access the Arctic Yearbook provides accessible and reliable information in a sea of pay walled articles and internet myths. It’s an asset for local global interface at the current state of the world that deserves to be used by Arctic academic and expert communities, as well as by a global audience.

From the pan Arctic perspective, there is a need for better informed and holistic discussions about the essential nature of the Arctic its people, its societies, its economy, its geography, its environment as well as what perceptions, and by whom, are there. These considerations can have impacts within the globalized Arctic, but also worldwide implications. The 10th edition of the Arctic Yearbook has aimed to provide such a space.