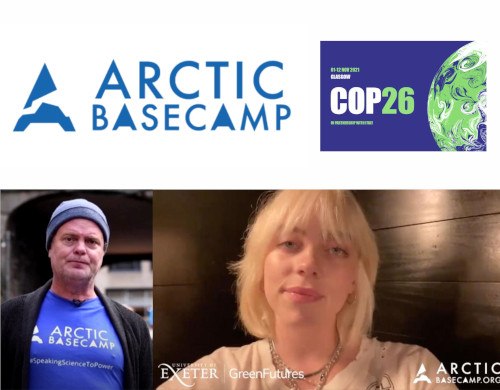 The scientists from the group Arctic Basecamp got the music star Billie Eilish and the actor Rainn Wilson to call on the world leaders to stand together and take urgent action at the 26th U.N. COP26 climate summit to be held in Glasgow 31 October – 12 November.

"This year our leaders are deciding the global actions required on the environment climate emergency in a critical decade for our planet," Eilish said. "We must stand together and speak up to save our planet, not just for us, but for our future generations, and we need urgent, urgent action now and to work together as one."

"Courage. That's what our world’s leaders need more than anything. The decisions that they make about the climate crisis in the next decade are the most important decisions in our planet’s history," Wilson said.

Arctic Basecamp is a team of Arctic experts and scientists who, for the last three years, have brought the Arctic to the World Economic Forum (WEF) annual meeting at Davos. They set up a real Arctic science basecamp, with an expedition tent which acts as our workplace during the day and our dormitory at night, camping in sub-zero temperatures to bring a message of global risk to the world leaders at the WEF. All scientists volunteer their time.

The group will have an event at the COP26 summit where the Arctic Risk Platform will be launched and introduced. The location is at Skypark Site 7, West Greenhill Place about a 5-8 minute walk from the main venue.