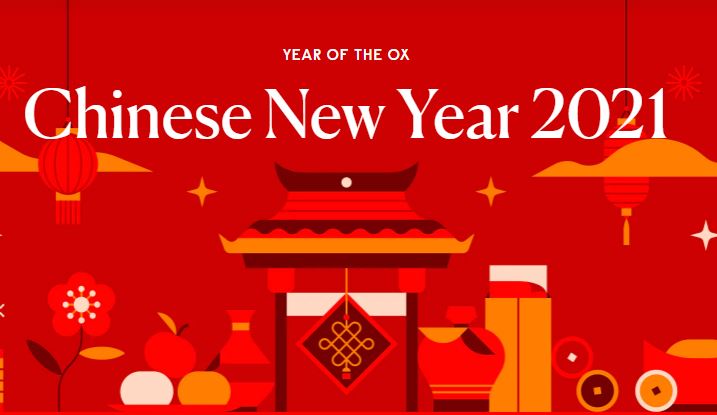 The Chinese New Year 2021 is today Friday 12 February 2021, and the celebrations culminates with the Lantern Festival on 26 February 2021. It is the most important holiday in China and to Chinese people all over and is celebrated by more than 20% of the world. The Chinese New Year marks the transition between the zodiac signs, 2020 was the year of the Rat but 2021 will be the year of the Ox.

The Ox is the second of all zodiac animals. According to a myth, the Jade Emperor said the order would be decided by the order in which the animals arrived to his party. The Ox was about to be the first to arrive, but the Rat tricked the the Ox into giving him a ride. Then, just as they arrived, the Rat jumped down and landed ahead of the Ox. Thus, the Ox became the second animal.

The Ox is also associated with the Earthly Branch (地支 / dì zhī) Chǒu (丑) and the hours 1–3 in the morning. In the terms of yin and yang (阴阳 / yīn yáng), the Ox is Yang.

In Chinese culture, the Ox is a valued animal. Because of its role in agriculture, positive characteristics, such as being hardworking and honest, are attributed to it.

Paired with the Celestial Stems (天干 / Tiān gān), there is a 60-year calendrical cycle. Although chǒu is associated with earth, the years also cycle through the five elements of nature (五行 / wǔ xíng).

People born in the year of the oxen har thought to be honest and earnest. They are low key and never look for praise or to be the center of attention. This often hides their talent, but they’ll gain recognition through their hard work. They believe that everyone should do what’s asked for them and stay within their bounds. Though they are kind, it’s difficult for them to understand persuasion using pathos. Rarely losing your temper, they think logically and make great leaders.