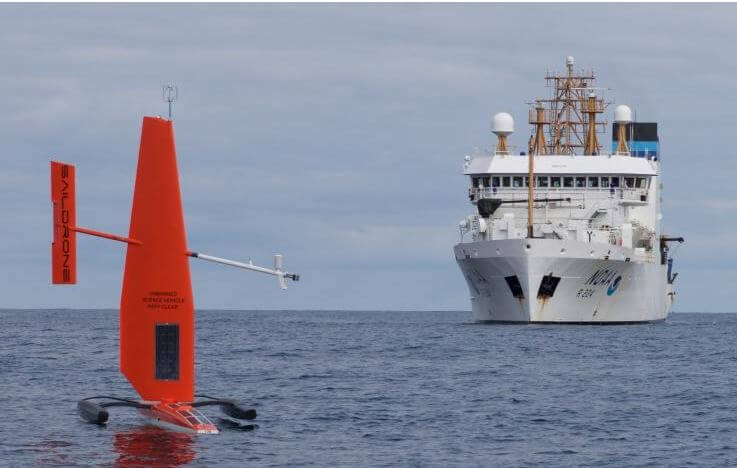 According to the newsprovider Arctic Today "A new presidential memorandum calls for better mapping of Arctic and sub-Arctic waters off Alaska to aid mineral extraction and other commercial activities in those northern waters.

The memorandum, issued by President Trump on Nov. 19, directs the National Oceanic and Atmospheric Administration to come up with a strategy within six months for producing modern mapping and nautical charts in the U.S. exclusive economic zone off Alaska.

The mapping needs to be done to “improve our Nation’s understanding of our vast ocean resources and to advance the economic, security, and environmental interests of the United States,” said the memorandum.

At stake, according to the memorandum, is information about commercial resources that have yet to be exploited.

“The U.S. EEZ contains a vast array of underutilized, and likely many undiscovered, natural resources, including critical minerals, marine-derived pharmaceuticals, energy, and areas of significant ecological and conservation value,” the memorandum said. Only 40 percent of that zone has been mapped and “significantly less” of the area has had its natural resources identified and evaluated, the memorandum said.

“The Nation is poised to harness cutting-edge science, new technologies, and partnerships to unlock the potential of our oceans through increased ocean mapping,” it said.

“This Presidential directive builds on my own efforts to secure strong funding for NOAA’s hydrographic surveys to address the backlog of charting needs in the Arctic. Mapping the waters around our state will provide valuable information on critical minerals and coastal resources while supporting safer shipping in the Arctic,” Sen. Lisa Murkowski said in a joint statement.

While the directive does not include any funding, it helps elevate the issue as a priority that is worthy of future funding, Hannah Ray, Murkowski’s press secretary, said in an email.

Murkowski has already secured $32 million for charting in the Commerce, Justice, Science Appropriations bill for fiscal 2020, Ray said. That bill directs NOAA to “accelerate acquisition of survey data to complement its own internal data and expedite comprehensive charting, especially in backlogged regions like the Arctic,” using contractors where needed to speed up the work, Ray said in the email.

The U.S. exclusive economic zone in the Arctic, the area of federally controlled waters that can extend up to 200 nautical miles offshore, covers 568,000 square nautical miles. Less than half of that is considered “navigationally significant,” according to NOAA.

Information about what lies beneath the Arctic Alaska waters is sparse compared to what it known about southern waters. Much of the nautical charting that is currently available is old, some of it dates back to a century ago.

To address that problem, and to prepare for what is expected to be a steady increase in ship traffic as sea ice retreats, federal agencies have been working for about a decade to update nautical information about the Alaska Arctic.

The modern effort started in 2010 when the U.S. and other Arctic nations formed an Arctic regional hydrological commission. The commission is a forum for cooperation in surveying and nautical charting; through it, agencies from member states can exchange information and collaborate on projects.

NOAA’s Office of Coast Survey — an agency that dates back to the presidential administration of Thomas Jefferson — has been conducting research expeditions to gather mapping and charting data. In accordance with an Arctic nautical charting plan first issued in 2011 and updated in 2013 and 2016, the OCS has produced several new nautical charts.

The effort has involved cooperation with the U.S. Coast Guard and use of an unmanned remotely operated vessel skimming the ocean’s surface.

Among the places where the OCS has worked in recent years is the area around Cape Lisburne and Point Hope on Alaska’s Chukchi Sea coast. Prior to a 2018 data-gathering expedition there, 70 percent of that territory had never been surveyed, the OCS said.

Despite the progress, only 4.1 percent of U.S. Arctic waters had been mapped to modern standards as of early 2018, according to the OCS.

Coastal mapping has progressed much further. A NOAA-funded project called ShoreZone launched in the 1980s, produced aerial-based mapping for about 120,000 kilometers of shoreline from Oregon to Alaska. Through the project, about 94 percent of Alaska’s shorelines had been mapped as of last year, according to NOAA."