U.S.-Icelandic Business Round Table on the Occasion of the Visit of Vice President Mike Pence to Iceland 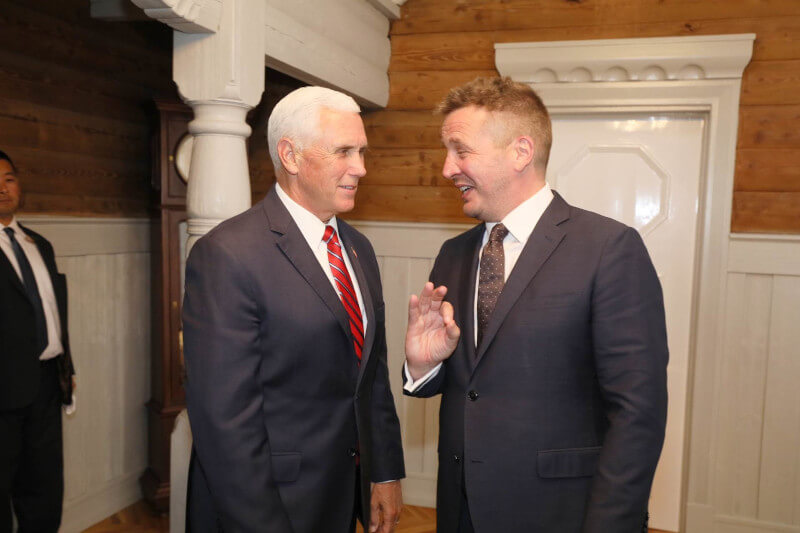 Mr. Mike Pence, Vice President of the United States, and Mr. Gudlaugur Thór Thórðarson, Minister for Foreign Affairs of Iceland, led a round table discussion on strengthening commercial, scientific and cultural ties between the US and Iceland with the participation of key American and Icelandic business leaders in Höfði, Reykjavík on 4th September 2019.

Minister Thórdarson underlined the significance of Vice President Pence’s visit for the extensive long-term relationship between the United States and Iceland. Minister Thórdarson emphasized the position of the United States as Iceland’s single largest trading partner, accounting for 16% of Iceland‘s total trade in goods and services as well as the largest foreign direct investment partner in Iceland. Icelandic companies bring innovation, jobs and investment to the United States through tourism, pharmaceuticals, technology and innovation industries. “We see a great potential for further strengthening our close relationship through trade “ says Gudlaugur Thór.

Vice President Pence underscored the strength of the U.S.-Iceland economic partnership and expressed his desire to expand trade and investment opportunities to benefit both countries. He applauded Iceland’s leadership in growing its innovation-based economy and recognized the important launch of the U.S.-Iceland Economic Dialogue in June 2019 to foster increased cooperation across sectors and industries. The Vice President highlighted the important role Iceland will play as the chair of the Arctic Council over the next two years, and conveyed the United States’ commitment to deepening our partnership on Arctic issues, to include promoting innovation, entrepreneurship, and sustainable development in the Arctic.

The business leaders expressed their interest in deepening the trade relationship between the two countries and discussed how the already flourishing trade relationship could be further strengthened. Icelandic companies represented were: Icelandair, Íslandsbanki, Kerecis and Marel, as well as the Confederation of Icelandic Enterprise, the Federation of Icelandic Industries and the New Business Venture Fund. U.S. companies were Bell, Grassy Creek Ventures, Lockheed Martin, Maine North Atlantic Development office, OneWeb and Teledyne Marine.