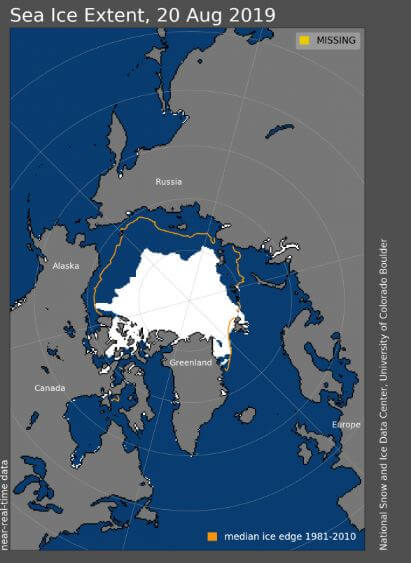 The monthly reports contain a variety of perspectives from advanced numerical models to qualitative perspectives from citizen scientists. The SIO provides an open process for those interested in Arctic sea ice to share predictions and ideas; the Outlook is not an operational forecast.

For the August report, the pan-Arctic median value for the September 2019 sea-ice extent is 4.22 million square kilometers with quartile values of 4.0 and 4.4 million square kilometers. Although pan-Arctic sea-ice extent was tracking very close to the record minimum of 2012 from mid-June through mid-August, the rate of melt slowed down in late August. A record minimum extent is not expected for 2019, unless late summer storm activity consolidates ice extent.