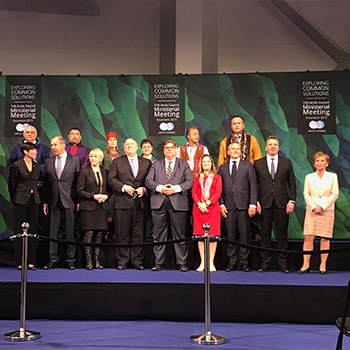 At the 11th Arctic Council Ministerial meeting in Rovaniemi, Finland, Ministers of the eight Arctic States, leaders from the six indigenous Permanent Participant organizations and the Chairs of the six Working Groups of the Arctic Council met to mark the passing of the Chairmanship from Finland to Iceland.

In the Rovaniemi Joint Ministerial Statement, the Arctic States reaffirmed the Council’s commitment to maintain the Arctic as a region of peace, stability and constructive cooperation. Additionally, Finland’s Foreign Minister Timo Soini released a Chair’s statement, summarizing the Council’s achievements and giving guidance for the next two years. The International Maritime Organization was accredited as a new Observer.

7 May 2019, Rovaniemi, Finland. Today the Foreign Ministers from the eight Arctic States, leaders from the six indigenous Permanent Participant organizations and the Chairs of the Council’s six Working Groups convened at the 11th Arctic Council Ministerial Meeting in Rovaniemi, Finland, to conclude the two-year Finnish Chairmanship and to mark the beginning of the Icelandic Chairmanship. The Arctic States reaffirmed the Council’s commitment to maintain the Arctic as a region of peace, stability and constructive cooperation in the Rovaniemi Joint Ministerial Statement 2019, which was signed by all eight Foreign Ministers. The joint statement also reaffirms the Arctic States’ commitment to the well-being of the inhabitants of the Arctic, to sustainable development and to the protection of the Arctic environment.

In addition, the Chair of the Arctic Council, Finland’s Foreign Minister Timo Soini summarized the work of the Council in the Chair’s Statement, which also provides guidance for the Council’s work during the incoming Icelandic Chairmanship.

During its two-year term, Finland placed a special emphasis for the Council’s work on environmental protection, meteorological cooperation, connectivity, and education. The accomplishments of the Council during the Finnish Chairmanship include projects on oil spill prevention, preparedness and response, on teacher education for diversity and equality in the Arctic and a series of health-related projects aimed at improving the health and mental wellness of Arctic inhabitants. The Council has also been working closely with the meteorological community to enhance cooperation and improve available services and forecasting capabilities.

Major reports released on or around the Ministerial meeting include the Arctic Climate Change Update 2019, the State of the Arctic Freshwater Biodiversity Report, a Desktop Study on Marine Litter including microplastics in the Arctic, and Improving Connectivity in the Arctic, as well as many others. All public deliverables will shortly be available via the Arctic Council’s public archive (oaarchive.arctic-council.org).

The incoming Icelandic Chairmanship will continue supporting many ongoing activities of the Council’s Working Groups and other subsidiary bodies, as well as introducing a number of new projects. With sustainable development as an overarching theme, Iceland will highlight four priorities: The Arctic marine environment, climate and green energy solutions, people and communities of the Arctic, and a stronger Arctic Council.
“Arctic affairs are a top priority in Iceland's foreign policy and chairing the Arctic Council brings a unique and much welcomed opportunity for Iceland to lead the collaboration between the Member States, the Permanent Participants and the Observers within the Council”, Iceland’s Foreign Minister Guðlaugur Þór Þórðarson stated.

At the Ministerial meeting, the Council welcomed the International Maritime Organization as new Observer.

The Foreign Ministers of the eight Arctic States were joined at the Ministerial table by the leaders of six Arctic indigenous peoples’ organizations, which are Permanent Participants to the Council. They have full consultation rights in connection with the Council’s negotiations and decisions, and contribute actively with their knowledge and expertise.

Read the Rovaniemi Joint Ministerial Statement, and the Chair’s statement.

The Heads of Delegation for Arctic States in attendance included:

The Heads of Delegation for Permanent Participants in attendance included:

The Arctic Council’s activities are conducted in its six Working Groups, which cover a broad range of subjects reaching from the effects of climate change to emergency response. The Working Groups presented their work, assessments and recommendations to the Ministers in Rovaniemi today. Among the major reports released on or around the Ministerial meeting are the Arctic Climate Change Update 2019, the State of the Arctic Freshwater Biodiversity Report, a Desktop Study on Marine Litter including microplastics in the Arctic, and the Expert Group on Black Carbon and Methane Summary of progress and recommendations 2019.

The first executive meeting of Senior Arctic Officials during the Icelandic Chairmanship will take place in June in Reykjanesbær, Iceland.